Daddio had what you might call a wild hair up his butt this weekend. His stomach hurt and he is tired of staying home and not having a bona fide job.

Hmmm, I’d say being the Stay At Home is a bona fide job. A noble profession. A calling even.

I did it for years and for the majority of that time I loved every minute.

There was a minute*, mostly toward the end of my tenure when my thought process often had me thinking..."If shit travels downhill sister, you’re in the valley."

I felt like the housekeeper at the Holiday Inn.

After an all night prom party.

Daddio has obviously already arrived at the afterparty. And it seems he's wallowing in that valley.

He's getting tired of being the “bottle washer”… (he can’t be the chief cook too, because all he knows how to cook is a hot dog, so dinner duty generally still falls to me).

Anyway…Daddio had a few complaints this past Easter weekend.

And they centered around our indoor outhouse.

The potty was a pissy mess.

Not pissy as in pee, well, I’m sure there was a sprinkling of misplaced pee in there somewhere, but that wasn’t what had Daddio’s goat.

I’ve had a few lavatory complaints myself over the years… mine centered around the mysterious white flecks that stuck to my mirrors (Pimple spew? Dental floss fling?)

Whatever it was, the elbow grease that it took to remove it had my upper arms really buff, and so while I cussed out every one and no one in particular as I worked to chisel it off, I  looked at the bright side of the chore.

Daddio’s eyes aren’t as good as they used to be, and in this case that is a blessing because he probably doesn’t even notice any white flecks on the mirror.

He does however notice what he calls toilet paper flakes.

Daddio took me into the bathroom to show me.


“Your kids” he said pointing. 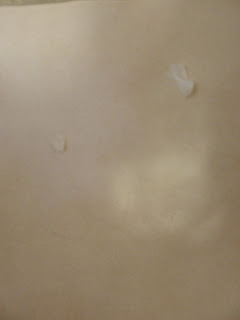 "They grab at the roll, and chip at it...see"
And leave little pieces all over the floor...for me to pick up."

"I also have to dehair the bathtub drain every day" 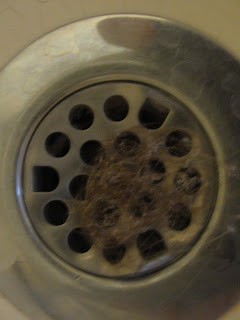 I googled "Hairest animal on the planet?" (hoping to pin a new name on my baby boy, the main suspect of this bathroom blunder,who's already appropriately nicknamed Bear) and I found this...

The Sea Otter is considered the hairest animal. Helping them to keep warm in the icy waters where they live, certain sea otters have arguably the thickest fur coat of any animal. Another contender would be the musk oxen, that has a thick coat of densely packed coarse hair. However in the unlikely event you pass one in the wild - don't get too close because they stink. They pee on their legs to keep warm and when they sit down the pee is soaked up by their hairy coat - producing the ponk* from hell.

Okay, so I'll have a little convo with our little musk ox.

(I'm totally kidding, that kid takes so many showers and wears so much foo-foo he smells heavenly...I caught a giggle thinking about him peeing down his hairy legs and well... one thing led to another).

Okay, back to my story…eventually I got placed on the "list" too when Daddio came upon my liddle biddie malfeasance.... I left a dead body on the wall. A splat for him to fix.

I'm brave enough to grab a magazine and bold enough to swat..but I can't touch the thing, I can't scoop the splattered guts and still quivering legs into a tissue. I'm scared that it is still alive enough to come after me.... 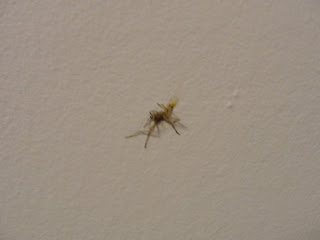 I promised to have more respect for this man who doesn't love his current job, yet still does it well. I wll make sure we all try and do a better job of helping to keep things looking nice. I can't however make any promises about spider bodies.

I hope he loves me enough to understand.