The Easter Bunny Gets Duped....

Daddio and I always wanted three children. We both come from families with that number of children. After we had the Sweet Prince Buttercup (who by himself counted as 10 children) and his lovely sister GoogieMonster we decided that 11 was a good number to stop at.

Then my brother John died. And there were only two (earthly) children for my mother to hold.

And faced with the reasoning that if (God forbid) something should happen to my sister that would leave only me..one child for my mother to hold,

and so Daddio and I went back to plan A and created child #3...

Child #3, my most cuddly. The one most likely to allow his mother (even at his advanced age) to maul him half to death.

Every mother should have one of him.

I've been known to say a time or two that on those occasions when I may doze off on the couch while watching the tube and should feel myself being covered with a small blanket...I know who's gentle hands will be doing the covering. 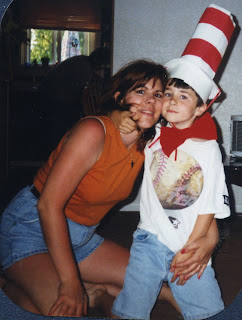 "That kid's got you soooo wrapped around his little finger" Googie accuses.

Googie, don't be a hater.

Your brother is a nice guy.

When I woke up the morning of my last big (B I G ) birthday next to the coffee pot I found this... 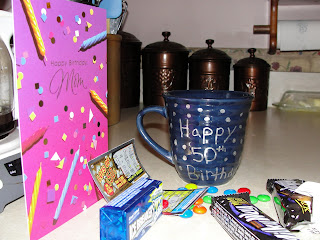 The other side of the mug says "I Love You Mom".

Since a gift this thoughtful usually comes from Googie, I gave her all the credit.

I later learned it was from Bear and was touched by his effort.

On Easter Sunday I found a small bag filled with brightly colored paper grass. Inside the bag there were a couple of mini peanut butter cups and this.... 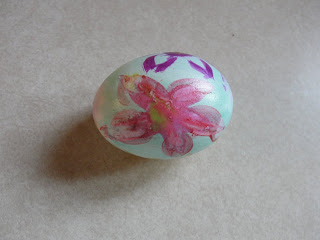 A hand decorated hard boiled egg. On the other side it said "MOM".

When I hopped into Googie's room singing "Here Comes Peter Cottontail" (You should see how mad they get when I do crap like that. tee-hee) at the top of my lungs early on Easter morning with her basket hanging from my arm, I thanked her for the beautiful decorated egg.

Later when Bear came down into the kitchen he asked me how I liked my egg.

"Yeah, me and Mal made it for you" he replied.

"Your sister made me that egg. don't lie" I scolded.

"I made that egg" he insisted.

Of all my kids, #3 is the most likely to tell a tale, stretch a truth, bald face lie (while looking me straight in the eye).

"She didn't make that damn egg, I did" Bear said starting to get mad.

His face was as straight as it's ever been.

"No he didn't" came the bathroom voice again "I did".

Baby boy shook his head no.

I peeked around the corner to see Baby #3's sister...she had her head down on the sink, pounding, with her palm, laughing her guilty lyin azz off.

Okay, so I do have hearts for iris's when I look at my son, but when he leaves notes like this... 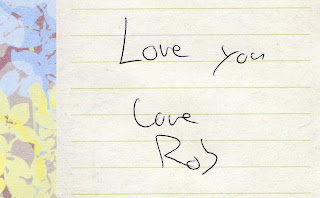 Later when I put on my reading glasses and took a closer look....

Labels: A coffee pot note, Bear and Me, Siblings