What a whirlwind weekend. Googie had a show and I agreed to do the hair. The poor dear was sick (any relationship between massive amounts of stress and frequent colds and infections?).

She had the lead in a silly little musical called Urinetown.

I sat in the audience on Saturday, with a couple of nuns sitting to my left. I cringed a bit when I saw them walk in and take a seat. Not like it was me on stage singing about pee or anything, but I knew what lyrics were coming and I know a little bit about nuns.

No matter how it’s cut, nuns and pee never mix, not even in the same sentence.

From my vantage point I could see by their posture they were quite stoic… I think an uncomfortable squirm would have not have been as bad. But nothing. No movement. Deathlike stillness.

Oh well, it is called Urinetown…..

On Sunday I sat in the audience as well. This time there were a couple of blue hairs (old biddies, not young punks) sitting in front of me a bit to my left. When the character Penelope Pennywise uttered her first “pee”, one blue hair nudged the other. I watched to see what they would do next….(yes, I was missing a portion of the play, but Googie didn’t have a big part in that song and I was dying to know what the biddies were gonna do when Penny belted “piss” and “defecation”).

Sure enough, the minute the word “piss” left Pennywise’s mouth the ladies looked at each other and both shrugged their shoulders. And then shook their heads.

After intermission, their seats were empty.

Too bad they left, Urinetown was really funny.

I’ve acted as Googie’s personal dresser for as many years as she has done theater. I don’t dress her, really, I just help with her microphone, or her bobby pins or I just look her over and give her the a-okay.

A last minute hair fluff and a peck on her painted cheek.

( "SPARKLE SHIRLEY...SPARKLE" : Shirley Temple's mother's instructions from the side of the stage.)

Then I sit in the audience and enjoy.

This day, she stripped off her top, I handed her the starched pastel yellow costume she wore for the show.

She slipped it on and I did a double take.

Googie’s brassiere was showing through the shirt.

She called to her cast mates and asked if anyone had a tank top she could borrow. One girl agreed to take her own right off her back and give it to Goog.

Once on Googie’s little 94 pound body it hung like a sack and it was much too bunchy to fit properly under her costume.

Later in the audience it was a bit hard for me to breath.

Not just that my heart swelled to take in the wonder that is my daughter,

but it was hard to breath wearing Googie’s too small bra.

I couldn’t let her go on stage, the lead in a show called Urinetown, wearing a pea colored bra that showed through her shirt.

A mother’s suffering knows no bounds.

(And for what’s worth, this is the SECOND time I’ve done this for my daughter…at least this time her bra size was larger than a size AA.)


PS....Her most sincere appreciation via this coffee pot note (and some stalks of beautiful white flowers, stolen from the restaurant where they ate after the show) made it all worth it, of course. 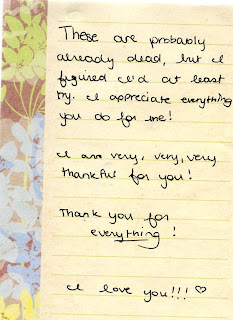