I just love it when that happens.....

It's no secret to those who know me well that I love old ladies. I especially loved one certain old lady, my grandma. When my parents brought me home from the hospital, it was to her house that we went. 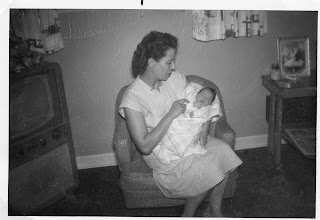 Busia and (one day old) me.

We lived with them until I was at least a year old. According to my mother it was in that year that I totally stole my grandmother's heart.

That I was special to her was no secret. I think she tried not to like me best, but I don't think she could help it.

I take after her in so many ways, even our physical size. Both of us 5 feet 4 inches tall, size 8 foot and a set of buck teeth.

Her teeth were hand made and why she ever paid for buck toothed dentures remains a mystery to this day. 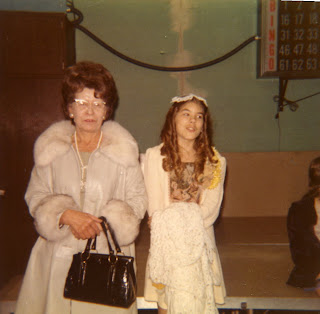 My confirmation day (look at the arms).

My grandmother and I spent so many hours in each other's company, I could write story after story about her and maybe someday I will. 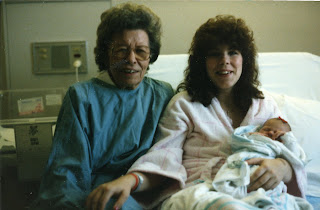 When her husband of 52 years died I convinced my dad to buy my grandmother a gold locket and chain for her birthday, which came a few weeks after his late winter death. When my dad agreed, the two of us picked out a nice one and I placed a picture of her and my grandfather (one on each side) inside. 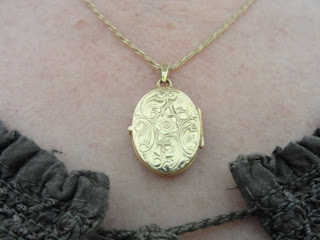 Every single day she opened that locket and kissed it.

Often I'd catch her absentmindedly fiddling with it,  rubbing it between her fingers. Back and forth her fingers moved over the oval locket.

When she died seven years after we gifted her with the locket, I asked my dad for four things, her sky-blue colored Tupperware gravy shaker, her tin measuring spoons, the dark wood crucifix that hung above her and my grandfather's bed and that locket.

I got them all.

On May 2nd she'll have been gone for 17 years. Hard to believe it sometimes that its been that long.

This past Saturday I was getting ready to leave my house to visit the other old Dolls in my life, The Golden Girls I call them. The girls are six women that live in a private senior home, usually on Fridays I do their hair. They are all in their mid to late 90's. One will be 100 years old next February.

It's a nice arrangement, they get a hair do and I get my old lady fix.

I was already a day late and running later when I had the thought that I had to wear my grandmother's locket.

When it first became mine, I wore it often. It helped me to feel close to her. I'd move it between my fingers like she used to do and open it and kiss the sweet faces inside. 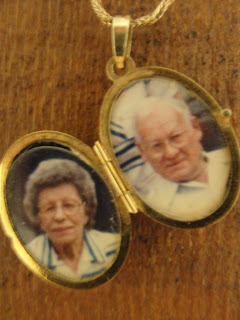 For the past few years I mostly just glanced at the locket when I'd be rummaging through my jewelery box looking for some other piece to wear.

Time was ticking and later and later I was getting.

I had to dig hard and deep for the locket.

Finally I found it, I opened it, kissed it, and hung it on my neck.

Driving in the car on the way to see the Dolls I was listening to the radio. The DJ mentioned that this day was April 10th.

My heart did a dance.

April 10th was my grandmother's birthday.

I wholeheartedly believe that last Saturday I got a visit from my favorite old doll.

I just love it when that happens. 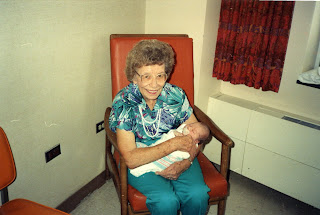