Forgive me Daddio for I have sinned....

Today after church Daddio offered to take me on my grocery rounds. This usually means a trip to the fruit market and to some kind of large grocery store. I had an awesome coupon for Meijers. One of those use the pharmacy, get twenty bucks off deal, so to Meijers it was.

The place was packed as usual. And I should know better that when poor Daddio starts to complain while still in the parking lot that maybe I should limit my trip to a loaf of bread and some milk.

I poo-pooed my gut warning and stupidly proceeded.

He found a space about a mile from the entrance. "A walk will do us both good" he said in defense of his crappy choice.

I don't care if it takes thirty minutes to find that perfect spot, and I usually don't realize that I've gone around so many times until I notice my gas gauge starting to go down.

Daddio went for a cart and he didn't even flinch when his mitts grabbed the dirty cart handle.

I shudder to think of all the E.coli he's probably just touched.

Oprah once did a show about E.coli and the places where it can be found.

Believe it or not public toilet seats don't have a ton of microscopic poop on them.

Bowling balls and shopping carts were found to be much worse...yuck

I've not stuck my fingers into a bowling ball since I saw that show.

Unfortunately, I can't say the same about shopping carts. Therefore I'm forced happy to use the sani-wipes the store provides.

Daddio gave me the evil eye as I searched (in vain) for the alcohol wipes.

"Forget it" he barked "I don't need those things."

"You're going to get sick" I warned.

"That's why I have such a superior immune system" Daddio brags "I'm not scared of germs."

Daddio doesn't really understand how aggressive he needs to be to successfully navigate a Meijer store on a Sunday after church.

Trying to be mannerly gets you nowhere besides stuck behind a lady with a coupon filled shoe box, six unruly snotty nosed children and two full carts.

So as Daddio, beginning to look brain dead waits behind the gang,  I scurry ahead grabbing items as I go.

Needing to get some tomato sauce for spaghetti I stop at the Hunts sauce and look for the big cans.

Of course, as usual they only have the eight ounce size and all of them seem to be dented.

When he catches up to me Daddio gets perturbed watching me feel out each can trying to find an uninjured few.

"What the hell does it matter?" he asks "just grab a couple."

I'll be sure to remind him of this little exchange a couple of days from now when he is suffering from stomach cramps.

We make it to the check out with me knowing that I certainly have forgotten something...you can't shop properly under that kind of pressure.

I choose a good lane and place our groceries onto the belt. Daddio was in front and didn't know what to do when the cashier passed him one of those grocery separating bars like a baton in a race.

When the cashier is almost done ringing our order I see that there is a great possibility that I may be able to use my $6.00 off $60.00 coupon as well.

I started getting giddy.

When the total hit $60.53 I almost screamed "BINGO", but for Daddio's sake I just stood mute and handed the cashier the coupons.

A little history here, over the years Daddio has gone to the grocery store once, maybe three times by himself. The couple of times that he did was because I was totally unable...I had a day old newborn at home or I was projectile vomiting and had a temperature of 103.

So only when he HAD to, did Daddio ever step foot into a grocery store.

I always gave him coupons and good directions about using them.

The following day I'd find them in a soggy ball at the bottom of the washing machine.

When I handed the blob to Daddio he'd just shrug and say "I forgot."

That was not a truthful statement...Daddio would rather hang by his earlobes than use a coupon. Using one is like asking for charity. Stealing money from the cashier's pocket. Trying to redeem a clam shell from the Great Depression... 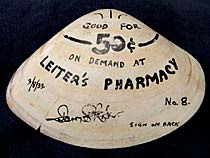 He was beyond horrified when the cashier swiped my first coupon and the machine did nothing.

She swiped and swiped.

Without even looking I could feel Daddio pain.

"Buy any alcohol?" she asked.

If we had Daddio would have cracked it open by now and would have been in a much better frame of mind.

"Nope, no alcohol" I answered.

"Ohhhh...it doesn't count your bottle deposits" Miss Cashier finally figured out. "You need to buy something else."

Daddio's embarrassment and the line behind us was growing by the minute.

Since the people behind us in their impatience had invaded our personal space, I couldn't reach the gum display and had to ask the cashier to choose a pack.

"Okay, two then" I told the cashier who obviously is also a Libra and was having a hard time making a choice for me.

The second pack didn't do it either.

"Charge me for two eight packs of Pepsi, I'll run back and get another." I suggested.

Finally, the machine took the coupons.

I sent Daddio and the other groceries to the car and I ran to the back to get my extra eight pack of pop.

It was a long walk which gave me plenty of time to plan my defense.

I was mighty tempted to ask the cashier for that baton and directions to the nearest exit.
Posted by Koby at 6:37 AM

Labels: Daddio and me, Shopping