Never a mid October passes that I don't get a dreadful feeling of missing my brother, terribly.

Doesn't matter how much time has passed.

It's always too much time..

I miss him everyday...

Does that mean I'm still in mourning?

Does it ever go away?

Most times it's not the knife stuck in your heart kind of mourning...it's a sweet reminder.

Like when I look at my nephew, his namesake.

He has the same big ol pumpkin head.

A big head covered in a tremendous mop of floppy blond hair.

I sometimes have the urge to thump him in the head.

Or grab him in a headlock and give him a rough back and forth with my knuckles..

A Dutch rub is what my Grandpa used to call it...

I want to do that to the kid.

And that makes me laugh.

Every October I replay the day he died and the couple of days before his accident.

The days are as clear to me as the day my children were born.

Like when Susan and I talked right after he died and I told her I wanted the unicorn music box, the one we'd gotten him for Christmas one year.

Pathetically cheap and cheesy, the music box that plays Rain Drops Keep Fallin on My Head, one of my brother's favorite songs.

His love of that song earned him a lot of ribbing as we grew up.

Susan was into John Denver and John liked the raindrops song.

Me? I listened to the hard stuff, I liked to think I was turning cool when I appreciated bands like Black Sabbath and Grand Funk.

(I also listened to the Osmonds and David Cassedy...but that wasn't cool to admit).

The embarrassment, the horrible, horrible humiliation when my friends would come to visit and my odd freaky little BJ Thomas lovin brother would belt out in squeaky (unintentional) falsetto...

"Rain drops keep fallin on my head, just like the guy who's feet are too big for his bed...dadadadaaaaaaaaaaaaaaaaa"....

Owning the record was bad enough, but the singing, sealed the deal.

He was freak flag flier for sure.

As we grew, the Raindrops song became a weapon in Susan and my arsenal of "ways in which we can prove, beyond a shadow of a doubt, that you were one messed up freaky ass kid" when torturing our brother with stories of our past.

Susan and I had discovered the unicorn music box in an aisle of Christmas junk at KMart one year.

We'd been looking for some cheap decorations and stumbled upon it.

Sitting on a shelf, cockeyed and looking broken the unicorn music box caught my attention.

In addition to their shared love of gawd awful music Susan and John also had a longtime thing for unicorns ...(don't laugh..it's true).

She'd given him a unicorn pin to wear on his coat... and she had a matching one on her coat.

So at the store, the day the unicorn music box caught my eye, and I learned what music was stored within it's tin walls we had no choice but to buy it.

And give it to John for Christmas as a symbolic reminder of our silly childhood.

I hadn't thought about that music box for years, until the day that he died.

I was on my way over to tell my grandparents that his accident had been too bad, his injuries too severe.

That he was gone.

On the way over I remember wondering how it was that the world hadn't been placed on pause, on hold..everyone was going about their business as usual.

How could that be?

How could the world just simply continue when my brother was gone?

I was too young to have experienced many deaths. So the concept that my brother was here one minute and gone the next was something I was having a hard time grasping.

Where had he gone?

Did he go right to Heaven?

Was he in a waiting room, somewhere?

Was in floating in the sky above my head?

A beam of sunlight? A soaring bird?

"Where are you?" I said aloud, wanting him to answer.

When he didn't... I banged on the steering wheel and screamed it.

When I stopped crying a second to listen for an answer...this is what I heard....

"Susan" I said later on the phone to my sister as she was preparing to go through John's things "find me that unicorn music box...that's all I want".

The music box sits in the top of my closet and every now and then when I bump into it or it gets tapped in just the right way it will spout a few notes of that crazy song.

It always makes me smile. 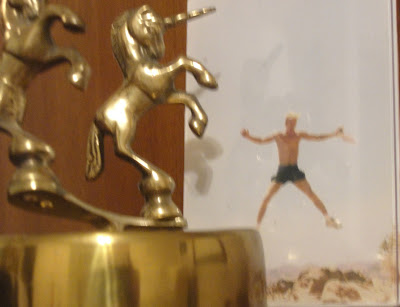 John's unicorn music box and "free" jumping in the Arizona mountains...
Posted by Koby at 7:46 AM