Googie, Trouble and I made a trip to the bank on Friday.

She's bonafide now (working 37.5 hrs per week,  her first "grown up" job) and needed an account where her checks could be auto-deposited.

We waited in a small vestibule for a bank employee to wait on us.

While we were waiting a young boy ran up and jumped into a chair next to me.

He began an excited chatter... sadly not a one of us could understand a thing he was saying.

I assumed he was foreign.

He talked so fast and was so full of life it was impossible not to laugh at his antics.

In the middle of one of his long animated monologues I thought I caught a word I recognized...

His little head bobbed up and down.

Once he got that I got him there was no shutting him up.

We heard about "Fwedir" (Shredder, a Ninja Turtles worst enemy).

and "Fwinter" (Splinter, the Ninjas' Sensi).

Soon the adorable chatter box got called away by his very distracted mother and Googie and I were called into the little cube office of the bank's Assistant Manager.

Right off the bat Googie let this guy know that she is deep down a pioneer woman who has a fear-filled and severe dislike of financial institutions of any kind (a little misunderstanding between Googie and her debit card some time back..and that's all I'm gonna dish about that particular matter, I don't want to get hit up side the head with her washboard)...

She told the man that she wants a no frills account. And to reiterate her point she said "They put my money in and I want to take my money out" said Goog "Simple as that. I don't want an ATM card, I don't care about a penny or two of interest, I don't want a credit card, I don't need a passbook, or a ledger, or anything that I have to read and be confused about.... To tell you the truth Sir, I really wish to just put my money under my mattress...but the company I work for has insisted that I have direct deposit"....

"Well then" the man said "I'll be right back, I've got to grab some papers that will get you started".

Googie pulled out her hand sanitizer, gave me a squirt and then in true germaphobe fashion gave herself another dollop.

(One can never be too safe you know).

Soon Mr Assistant Bank Manager was back and shuffling a nice sized pile of papers...

I almost told her she could sign with an X, since pioneer women usually weren't too educated and didn't ever sign anything..(but I (wisely) thought it best to keep my corny jokes to myself).

Googie and I watched as the man prepared the papers.

He appeared to be having some trouble separating them.

As we watched he put his hand toward his face, tipped his thumb sideways and drug it across his waiting tongue.

Ohhhh sweet Jesus...No he did not just slather his thumb with spit.

Ummm yeah, he did.

He licked his thumb and soaked it with spit and then he touched it to the papers.

Then he attempted to hand the wet paper to Googie.

The look on her face was priceless.

I dug my nails into the palm of my hand to keep from exploding into hysterical laughter.

I didn't dare look at Goog, but I could feel her shaking.

At one point we both started laughing...

I said something dumb like "oh, we're really excited that she's getting an account"..which made us laugh even harder

Just as I was feeling really sorry for poor germ infested Googie the Bank's Assistant Manager turned his attention toward me and said "I'm going to give you a business card too, if I can help either of you, don't hesitate to call".

He beat me to his card holder...

and like a slow motion shoot out in the movies

instead I sat powerless and watched as he slurped up his thumb one last time and soaked the business card he was about to give me.

I let him lay it on the desk.

Hoping it would dry a bit before I had to touch it.

When I thought neither of them was looking I reached for the card.

Using the edge of my fingernail I inched the card toward me.

I gave another stupid excuse for our giggles as we made our way out of his office.

(I looked around for the bald guy from Candid Camera... or MTV's Boiling Point staff)

Googie and I tumbled out the door and made it to her car before she lost some tears and I lost some pee. 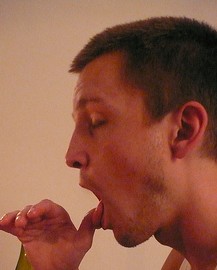 Pssssst...Pass the Purell
Posted by Koby at 5:55 AM

Labels: anything wet from the mouth, Googie and Me, Holy shit that guy is licking his thumb, Oh Lord how I hate spit and wet slobber