In order to help our budget, I've been trying a couple of new things to save some money…you know, every little bit counts.

We’ve got a kid in college, one just married and still frequenting the Bank of Mom & Dad, and a teen in his senior year of high school.

We also support two dogs, one scrawny over eater and one big boned Chihuahua who is currently recovering from a $150.00 case of the sniffles.

Translation: We are broke as hell.

And we need to find places to save money.

A former name brand only girl I now find myself choosing brands like Kroger, Meijer, Red White and Blue, and Value brand..….

I never really considered myself a name brand snob or anything like that; I think I bought name brand because that is what my mother did. And because I grew up eating these things and I figured since I could count on them to be consistantly good they were worth the extra flow.

Del Monte had the best beans and Campbell’s, the best soup.

And don’t even get me started on how amazingly delicious Bird’s Eye frozen corn is.

So since I’ve gone “thrifty” I’ve made a few discoveries.

I’ll share them with you. This information could save you some time (and spare you a stomach ache).

Vegetables…(according to a cute television commercial from Meijers) are vegetables.

Corn is corn and beans are beans.

I guess in theory there isn’t much anyone can do to mess that up…and while that should be true, I've discovered that it sometimes isn't.

I’ve also taken note that there is a huge price difference between a can of no brand green beans and Del Monte green beans…but price my friends is not the only difference.

And surprisingly, taste isn’t what I’m referring to either… I’ve found that almost every single can of name brand (namely, Del Monte) green beans contains at least one stem and many times TWO or more hard, fibrous green bean stems.

I probably shouldn’t be sayin that the lovely people from Bangladesh (who stuff our cans and check to make sure a feral cat hasn't fallen into the bean sorting machine) don’t care about what kind of crap they allow to take up space with the green beans…but, really when you think about it, the 13 cents an hour probably has them adopting a “Who gives a shit what these American creeps eat?” attitude.

And who could blame them?

I also found that a 7 oz can usually contained 6.5 ozs of stinky water.

And the other .5 ozs left in the can was waterlogged and tasteless.

Things have changed on the tuna front…now, it’s the name brand tuna (Starkist) that is filled with the unappetizing bits of black stuff.

The Kroger/ Meijer brand tuna is delicious....and all white.

To go with that delicious tuna one would need to purchase some kind of salad dressing to mix it with.

Recently I decided to try some “Real Mayo” from Kroger. Much cheaper than my beloved Hellmans.

Remember the wintergreen paste that you ate by the finger full when you were in Kindergarten art class?

Minus the delightful minty wintergreen flavor and you have yourself a lil sample of Kroger brand Real Mayo.

At the same time I bought a jar of Kroger “Classis Whip” to replace Daddio’s Miracle Whip.

The Classic Whip isn’t much better than the Real Mayo. It has a tangy sickly sweet flavor that would probably be palatable if it weren’t for the texture.

Nickelodeon Slime minus the green.

I’d like to add that I’ve not eaten Nickelodeon Slime…but if I did I am certain it would taste just like Kroger’s Classic Whip.

Since these products do come with a money back guarantee and I’ll be making a trip back to Kroger.

“Reason for return?” asks the nice, friendly (okay, a girl can dream, can't she) Kroger clerk.

“Not suitable for human consumption” The Chump (that would be me) who bought this off brand crap would answer.

“Any suggestions as to how we could improve this product?” K clerk

“A bit of wintergreen flavoring may help”. I will offer. 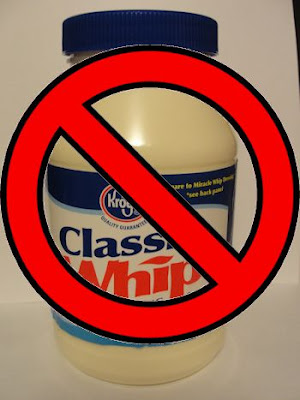