“I think your son is drinking the mouthwash” Daddio said to me.

“WHAT” I shriek in reply.

I think the sentence “I think someone (namely, your son) is drinking the mouthwash” wouldn’t normally bring about a physical sick adrenalin rush type pit in your stomach feeling…unless you work with juvenile addicts who sometimes drink the mouthwash.

“He’s using too much, he’s going to burn his mouth” he clarified.

“Lay off the mouthwash Bub, you’re using too much” Daddio later tells his son.

“I’m not using that much Dad” he shoots back with an eye roll.

My men folk have a unique way of communicating…they don’t, really.

They mostly grunt at each other, push each other around by the shoulders; and they make smart cracks about me.

“That stuff (is like) acid” Daddio says to the drinker.

“I only (use it) once a day (and that’s what the directions say, and I’m not using more than a capful)” the kid tells Daddio, “(it’s just really crappy stuff), cheap and crappy”.

From this exchange I understand that Daddio is worried that the kid is going to burn his mouth by using too much of the cheap mouthwash…and I get that the kid thinks that Daddio wants him to water it down so that he doesn’t use as much.

In my defense, I did buy cheap….did you ever price mouthwash?

I'm even thinking about forgoing the toothpaste too.

We have baking soda and water.

And we have toothbrushes.

And there are a few candy canes left on the tree…who needs mouthwash and toothpaste?

I offer to locate a piece of gum to help with the sewer breath.

When I fish one out of the bottom of my purse it is partially open and dotted with some purse lint.

“Pick it off” I say “You know the five year second rule”.

“Ewwwww, it’s hard and it tastes like perfume” the kid says.

“Shut up and chew and lay off that mouthwash” I warn.


There was a present waiting for Daddio next to the coffee pot this morning. 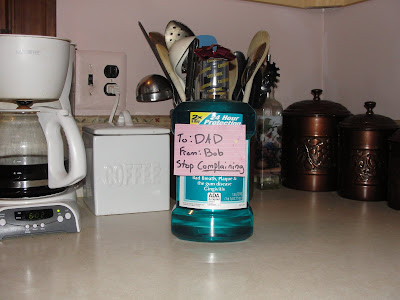 Complete with a burgandy bow on the top.


“I didn’t expect him to buy another bottle, I was just worried that he would burn his mouth if he used too much”. Daddio explained to me.

Later, the exchange between father and son will probably go something like this….

“Oh, grunt” the kid will reply.

“You paid WHAT for that mouthwash” I’ll screech when I find out he paid nearly a gold bullion for the jumbo sized bottle.

“Reimburse the kid” Daddio will interject as he tousles his son’s hair.

A shoulder bump and a chest thump and they'll both walk away, smiling.