Yesterday Sunday found us in lock down at the Palace of Koby.

Too damn cold to go anywhere.

Which will have me watching my back extra carefully this week...

I hate to mess with the BIG GUY...

Daddio was particularly kind yesterday Sunday to those of us who work at home.

Each and every time the creaking bedroom door, the over filled laundry basket and I roused him from one of his 13 (or so) naps he'd open one eye (Popeye style) and ask sweetly "want some help with that?".

Daddio comes from a family of nappers.

He can nap any day any time.

He tries to get me to nap with him.

Not just a regular nap, the one he wants me to take he has nicknamed "the power nap".

"Preparation" he says "is key".

Downstairs he grabs a set of car keys, brings them up and places them in my hand.

Hang your arm over the edge of the bed, he says.

When the keys hit the floor, that means you've slept enough and you'll wake up, refreshed (and hopefully be rid of the pissy pout-ful poor poor pitiful me attitude).

Oh hell to the freakin no...by the time I'm relaxed enough to let go of the keys and they fall from my limp wrist and hit the floor I'm startled awake.

I have a wet spot on my shirt from 6 minutes of drooling.

And bed-head so bad I couldn't (and wouldn't) go out the front door even if the house was on fire.

I can't waste time napping... I have so many other important things to do.

fight the urge to eat an entire bag of ChipsAhoy cookies,

let the dogs out,

I have to be very careful during days this frigid..not only of frostbite but of kidnappings.

I wrote about it once... here.

And as you can see by the article below..this is an ongoing issue for small dogs and their owners.

CRYSTAL LAKE, Ill. - An owl attack has left a 4-pound (2-kilogram) Chihuahua with a healthy fear of the dark.
The attack happened when Chico the Chihuahua was out for a walk with his owner George Kalomiris in the Chicago suburb of Crystal Lake last week. Kalomiris says they were walking down the street when a great horned owl swooped down and tried to fly away with the 3-year-old dog.
Kalomiris says he kept a firm grip on Chico's leash as the bird dragged the dog across the sidewalk, and he managed to scare the owl away.
Chico was treated for a puncture wound caused by the owl's talons, and his owner says he's still traumatized. Kalomiris says the dog now refuses to go outside at night. 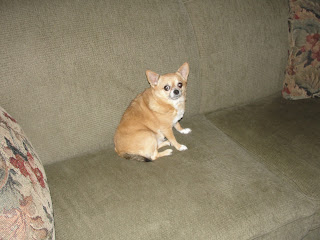 Jersey takes Chico's "stay in the house at night" advice to heart.
Posted by Koby at 6:15 AM