When you work with children you have an obligation, a legal one, to report any and all signs of suspected abuse and/or neglect.

And while everyone wants to do the right thing..sometimes it comes back to bite you in the arse.

I remember one time visiting a kid in detention and noticing he had a golf-ball sized bulge on one side of his cheek.

"Why is your face swollen right there?" I asked the young thug, pointing to the side of his jaw.

"That is where the cops broke my jaw" he responded.

According to the kid he was running from the PO-PO and when they finally caught up to him they threw him against a fence, he hit his face on something and broke his jaw.

I asked him when it happened and he said it had been a couple of years.

Dr. Mom (that would be me) assessed the situation and determined that someone with a bit more credentials should be called.

In other words, a CPS report had to be made.

A co-worker told me I was nuts to even report it.

You probably have no idea what kind of work and hassle and drama and paperwork I'd just signed myself up for.

The kid ended up having surgery for an infected, not properly repaired jaw bone fracture.

I did the right thing.

Yesterday I came across a couple of staff and a couple of loveables in the hall outside the classroom.

(it really didn't take the trained nose of a blood-hound like middle aged nosy know-it-all to smell it...the sight of one of the loveable thugs laying on the floor, one up against the wall, red faced and yelling into a cell phone and three pacing staff to say real loud..."what the frick, somethin be UP").

Upon closer investigation I learn that the loveables have been in a fight.

Didn't appear as such.

Upon closer investigation I learn from the staff present that one of the loveables is covered in bruises.

Holy crap!!! (I think when I see him up close) he looks as if he's been choked almost to death.

"What happened to you?" I asked the bruised loveable laying on the floor.

And although the staff with the loveables were doing a fine job with the situation I had to get my two cents in there...

I picture a battering step-father.

Or a double-crossed gang member.

Upon closer investigation I learn that some times things aren't always what they seem.

Upon closer investigation I have a different thought...

The mother in me (and my former teenage self) suddenly sees the forest for the trees...

"Come here" I said to the boy "let me have a closer look at that neck of yours".

"Those aren't brusises...they are HICKIES" I say.

His entire "bruised neck" (which truly looked as though he'd been strangled by the HULK) was a stinkin hickey fest.

A hickey necklace we used to call em.

And the other loveable, the red-faced one screaming into the phone confirmed my suspicions.

Thank God no one had yet dialed CPS.

It could have been incredibly embarrassing. 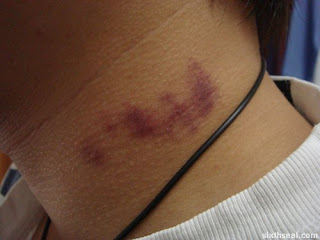 An example from Google Images...our loveable's neck was "abused" 10x's worse
Posted by Koby at 5:29 AM

Labels: Child protective services may not need to be called, Hickey chains, hickey necklaces, How bizarre, seeing the forest for the trees, The loveable thugs, Things aren't always what they seem