The back and forth.

We have a couple of new youth.

One has problems proportionate to his height.

Things come out seemingly easily as I question him.

The perpetual cheerleader in me says "Your past is just the beginning of your story, you write the rest" and other such sentiments.

We've had a couple of deep talks and some not so deep conversations.

What he wants to be when he grows up.

As the kid begins to unravel and we take a deeper look at the depth of his problems...I am totally overwhelmed and saddened to my core.

I spend entirely too much time obsessing over the hows and the whys.

At this moment how and why are moot points.

Can he manage to claw his way out of the mess he was birthed into?

Now that is the question I always have such a hope-filled answer for.

So far it appears to be a big fat no.

Don't take NO when YES is (possibly) an option.

(If you are a deep thinker like I, you may have thought when you got to the end of this blog post..whatever had that woman naming this post An Apple A Day....?)

I had every intention of telling you a story about my own personal loveable, my darling dear Daddio and the ebb and flow of our life together.

I wanted to tell you that for the last, ohh, maybe 25 years or so I have been sticking an apple in Daddio's lunch, usually... it's a fresh one every day.

We go through the normal Daddio and me bull crap...

Daddio: "those apples are for shit, they are all mushy inside".

Recently, after about a week or so of some troubling behavior I began to see an odd pattern emerging.

Daddio's apple gets sent to work.

Apple almost in...on this day the clock is not on Daddio's side. Finding himself inching toward late he realizes that things must move faster if he is to meet his goal of time-li-ness.

His managerial mind jumps into results mode and before I know what is happening he is finishing packing his own lunch.

Smashing air and Cheeto(s) filled baggies into an open spot.

Tossing out a item or two.

He's about to zip when I realize that he has forgotten "the apple".

"Hey, you forgot your apple" I say.

"I don't want that apple" he answers,

then continues...."You may have noticed that I haven't eaten an apple in weeks".

"I bring it home every damn day" he says, emphasising (for dramatic effect) every... damn... day.

"I'm thinking that maybe you are a bit attached to that little red guy? That maybe he is your security apple?"

I could tell by the look on his face that Daddio was entertaining thoughts of chucking that bad boy toward my head... but I got to it first,

and lovingly tucked his little red buddy into it's favorite familiar place, between the sandwich and the peanut butter crackers. 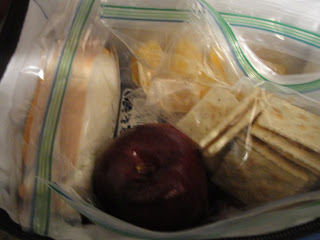