You may recall (if you read the dribble I write on this blog) that I made a promise to write the second of my two up town stories.

In case your not one of the many hundreds (well, actually thousands really) Not All Who Wander Are Lost blog readers/fans (I'm makin myself sick here)...who read the first up town post here it is...

Up town was what my grandmother called the heart of her city. Every year she brought my sister and I to her house to attend the big street/art fair they had in July.

This year, like all the others we were soooo anxious to get there and get the fun started that we were driving my grandma nuts.

Me, Susan (hammin it up as usual)
and (pint sized) Grandma K

This particular year we had guests tagging along.

They were my grandmother's sisters in law.

A set of creepy twins that looked EXACTLY like her husband (our step grandfather) in frizzy bun wigs.....

(If you are thinking YIKES, you'd be right).

They were given the names of the months, May and June....and if it's not just a figment of my overactive imagination..I'm thinking they had another sister named April...(mom, is this true, or is my mind wandering again???)

The twins were large women who both had a fondness for chain smoking cigarettes they let dangle from their lips.

Dangle with ashes at least an inch long.

The cigarettes bounced up and down like mini diving boards when they talked.

I spent countless minutes mesmerized by those dipping ashes.

Wondering just exactly how long it would take them to jump.

The twins had a great fondness for liquid beverages too.

Especially beverages that go by the names beer and whiskey.

I'd never seen the twins in the light of day.

Usually I'd only seen them at night time card parties.

Where Susan and I would watch them out of the corner of our eyes.

They were fascinating characters.

Too much drinking and too many smokes and we had ourselves a little party.

This year the twins were going up town with us.

I remember walking to the fair and thinking how different my grandma was from her sisters in law.

While they were tall and loud, she was 4'11" (or maybe less) and very soft spoken.

And cackled with deep, raspy laughs.

Because we were young, Susan and I hung pretty close to grandma and the twins once we got up town.

It was still a lot of fun.

We bought all kinds of fair goodies to eat and spent lots of our grandma's money trying unsuccessfully to win cute stuffed animals.

Our young uncle's band was putting on a show at the fair at noon this particular day and when it was near starting time we made our way through the crowds toward the center of town.

Suddenly, out of nowhere, one of these 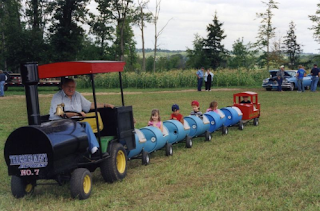 and ran over Susan.

Yes, I did write ran over Susan.

As it plowed into the two of us, I was pushed aside, but it threw Susan to the ground.

She was trapped under the front wheel of the tractor train.

She was in shock and having trouble breathing.

I remember people around us hollering and I remember the split seconds when no one knew exactly what to do.

My petite grandma knew what to do.

She ran to the side where Susan was pinned and like a 400 lb body builder she squatted down and put her shoulder under the front of the tractor. She rose up, anchored her tiny legs sideways and lifted the tractor off of Susan's chest.

When the tire lifted off of Susan my grandma used her short leg to kick her out from underneath.

When she was far enough to not be squished again my grandma let the train fall to the ground.

The people around us cheered.

My grandma stood up,

brushed the mess from the front of her shirt,

An ambulance came and checked Susan and grandma over and once they were proclaimed "un broken" we went on our merry way....

We were treated as mini celebrities the rest of the weekend.

The creepy twins were abuzz, they kept mentioning "owning that fair.".........over and over and over

and they smoked cigarette after cigarette looking exactly like my grandpa with lipstick on.

( Tractor photo stolen borrowed from "moonlakeshow dot org")
Posted by Koby at 5:47 AM

Labels: Are you tryin to kill me?, creepy twins, growing up, Kinfolk, Siblings, Susan, The Twilight Zone, Yuck...Life is like a giant roller coaster