I've been having nightmares lately... like last night I woke up and thought the ceiling fan was a tarantula.

My heart pounded so hard I thought it was going to wake the dead Daddio.

Once I'm awake it's hard to let go of the thoughts in my head.

Thoughts that swirl, twirl, twist and grow more gigantic as I think them.

So after the tarantula fan turned back into a regular fan and my heart was naturally de-fibed back to a more regular beat I started thinking about Googie's getting married.

And then I didn't want to go there.

I still have a little more than a year.

Googie planned it that way.

It will take us that long to wean.

No, I'm not still nursing.

When Googie was a little girl we used to talk often about her lack of a sister.

Maybe it was because I was so close to mine?

Whatever it was, she missed not having one.

And it made me feel sad and guilty.

Not so much that I wanted to give her one...but still, I do like to fix things.

Especially longings of my children.

One day a five year old Googie was being particularly sad about being sisterless.

And so on her pity pot was she that she also claimed she was friendless as well.

Of course seeing my daughter in such emotional distress I came up with an idea.

How bout I be her best friend and sister???

My name would be Betsy.

And we would have all kinds of sister fun.

When we were alone Googie would ask if Betsy could come over and play.

She and Betsy would jump on beds, eat ice cream covered with chocolate syrup and crushed Oreos for dinner.

They would color and sing.

And watch movies and build forts with the couch cushions.

Googie and Betsy were best friends, as sisters often are.

Over the years Betsy came often, well, whenever Googie needed her, she was there.

And like lots of things that sit on a shelf and remind us of our childhoods' Betsy has a place in Googie's heart.

And I know she always will.

Googie even made her a card the other day.

Googie and her class were making cards for people they love.

Here is the one she made for Betsy. 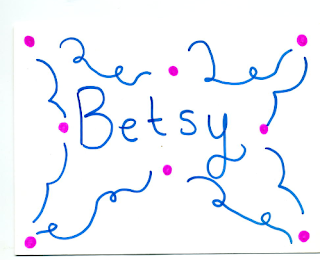 The oh so beautifully decorated envelope...and below, the card inside. 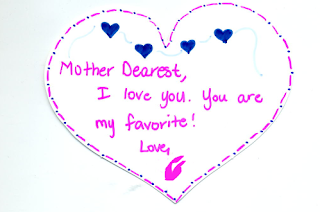 And all this time I thought I had her fooled.
Posted by Koby at 6:50 AM

Labels: Best Friends Forever, Don't forget Betsy, Googie and Me, you are just a baby, You can't get married