He came from three kids.

I came from three kids.

Then I had the Sweet Prince Buttercup....

And 23 months later Googie Monster made her entrance.

And Googie just rolled with the flow.

So for a couple of years after the two of them were born Daddio and I were content with having 7 children.

And then my brother John died in a horrible accident.

And that left just me and Susan.

And I spent lots of time wondering how awful it would be if my mother had only had two children.

And I was left sibling less.

I told Daddio that I wanted our third baby.

Now.... I didn't have him to replace my brother.

I had him because I realized that I felt like something was missing.

When I found out that I was carrying a boy....

Another boy could mean 6 more children.

So with this one and Buttercup and Googie I was going to be a mother of 13.

I didn't have the patience to mother 13.

It was hard enough many days with just the 7 I already had.

I went into labor with my darling Bear at 1am.

Just after Daddio and his friend and I watched an episode of Saturday Night Live.

For a late night snack we'd had White Castle (for those of you living outside of Michigan White Castle is a little burger joint that sells theeee most addicting teenytiny flat square hamburgers for about a dime apiece...being so cheap and small you are compelled to buy at least a dozen to eat at one setting....If by chance you should ever visit I implore you to only sample one...or make sure you are very near a bathroom, as Daddio says "those babies work fast").

I was a glutton that night and in addition to a cheeseburger (or five) I ate some of their onion chips.

You know the charcoal they feed you at the hospital when you ingest something horrible and poisonous....

and you need to throw-up???

I was looking for an "at home" version around midnight that night.

(I have to stop, my stomach is getting sick)

Anyway, I credit those damn awful onion chips with starting my labor.

Daddio and his friend "Dah" had had a couple of beers (not so many that driving would be an issue)....

His friend laughs and likes to tell the story this way.... I came into the room and (I Love Lucy style) told Daddio "it is time" and according to his friend (he swears this to be true) Daddio grabbed my suitcase and ran outside and then backed out the drive...

According to "Dah" I opened the door and waved at the excited father to be, letting him know he was forgetting something.

This new baby boy and I spent lots of time together....he was (and is) a joy.

And most days he was like having only 3 children.

So he and Googie and Buttecup equaled only 10 children.

He had his girlfriend over last night and I couldn't make over him like I usually do at bedtime the day before a birthday.

Instead I left him a note on his pillow.

When I'm long gone I hope he will follow this tradition. 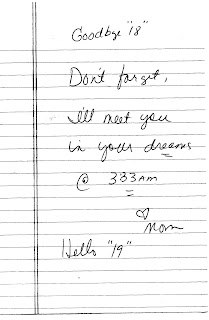 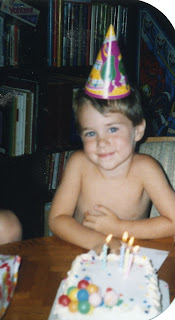