My sister, brother and I were blessed with two wonderful grandmothers...they were both loving and fun and treated us like royalty when we visited their homes.

My mom's mom brought us to her home every year in time to go to the Street Fair, or Uptown as she called it.

Usually we'd go over at the beginning of the week and hang out until the Street Fair began on Wednesday.

Then we'd spend the entire weekend hanging out Uptown.

While there in her little neck of the woods Grandma K would let us do what ever it was our little hearts desired.

She'd provide a roll of masking tape, some paper to make play money, and a jar full of coins.

She'd also let us have free reign of her teen son's bedroom and all his belongings including his clothes.

Using the masking tape we'd tear off little pieces and print the "price" of the item, then stick it on.

One of us would paw through our uncle's things making choices of what to buy.

The other would play cashier and ring up the stuff.

Impressing chicks was his favorite pastime.

The poor guy had no clue we were using his bedroom as our store and his things as our merchandise.

The game came to an abrupt end one Saturday morning.

After a gig the previous night our uncle was putting the moves on some foxy chick...she was all impressed by his long hair and fancy guitar licks and with it being the early 70's and all, he figured (and rightfully so) that this honey would probably take him home for a little free luv.

They were hammerin out the details when suddenly she leans in and picks something off his shirt sleeve.

It was a piece of cream colored masking tape. 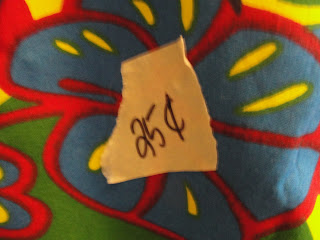 "Wow" she said "you forgot to take the price tag off your shirt."

He spent the better part of the next thirty minutes trying to convince the girl that he had no idea where that tag came from.

We were never allowed to ever ever step even one foot into his bedroom ever ever again.....