I was going to title this post Full Circle as I'd planned to bring you there.

Then I decided...don't be a hater.

Don't give your loyal and very much appreciated readers a sick stomach two times in one day.

Yesterday at the Donut Shop (my place of employment...not really a donut shop, but that's what my brother in law calls the factory where he works..when he leaves its "I'm off to the donut shop to make donuts" he likes to say...and since my mind is such a simple and easily fooled thing .. the Donut Shop it is)

Yesterday I had the oddest conversation at the Donut Shop....

No, we weren't taking about donuts....

But we did talk about eating.

About eating a placenta.

(I'll pause now, in case you need to grab a bucket or a trash can to deposit the contents that just rose in your throat).

One of the young guys I work with just celebrated the birth of his second son.

He told the group of us standing around shooting the bull this morning that his nursing wife was eating her placenta.

(I vaguely remember someone calling for "smelling salts"....)

When they picked me up off the floor, he explained,

After doing lots of research (that crazy ass Google) he and his wife determined that eating the placenta would be good for his wife's post partum depression, it also is reported to increase milk production and do a myriad of other healthful things for the person brave enough to eat it.

"HOW did she eat it" I asked

He told us they brought it home from the hospital, and found a lady who came over and made capsules from the placenta.

She pureed it, (still with me??) dehydrated it, then placed it into capsules.

I'll use the polite comment my grandpa used to use when he just didn't get a personal choice someone else had made...

I promised you (and most specifically, my darling pen pal from England, Nicola) a coffee cake recipe... 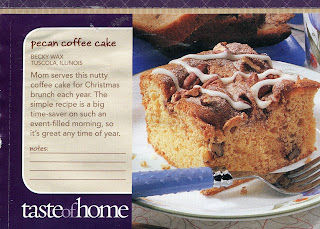 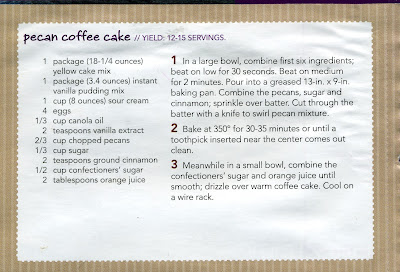 I hope you like it....I love this cake, but then again, people eat all kinds of things that others wouldn't think of eating...so to each his own.

In case you are a glutton for punishment...here is some additional information about eating your placenta....

(Not that you couldn't Google it yourself if you wanted to..., just trying to be a good hostess here for christsake goodness sake)

Labels: how bout a little coffee cake, How can you treat your lovely blog readers that way? Yuck. Puke. And all that jazz...Oh, it's deee-lish, You are messed up