How can something so pretty smell so bad???

Daddio said the above phrase the first time he changed one of Googie's diapers.

He's right of course....pretty and stink don't go together, even in the same sentence.

Shopping at Kroger my favorite ever grocery store (okay I hate all grocery stores, but especially this one where I weekly pull stale bread and rotten meat off the shelves and bring it up front to the Service Desk and complain...they don't much like me at Kroger, but the store is very close and so I guess we're stuck with each other)  anyway....I spotted some lovely paper towels. I'm not shy to admit that I'm one of those odd balls that sort through the shelves of paper towels looking for ones that match my motif.

Its almost as nice as being told you have beautiful children when someone notices and says "look at those cute paper towels".

I was happily moseying down the paper product aisle at Kroger's with that grocery gaze* on my face. When I rounded the corner this is what I saw on the end cap... 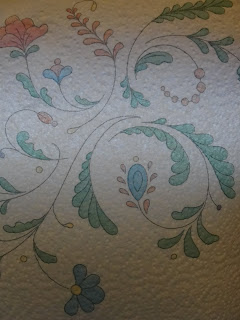 Fireworks went off in my brain, and like when I first saw the mini grocery cart a few posts back, I'm quite sure I heard trumpets.

These freakin paper towels were to die for. The blues were soft and muted and the corals vibrant. The pattern large and whimsical...

And....they were cheap at twice the price*. 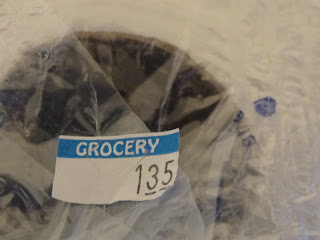 Well folks I'm sad to report that while the paper towels did indeed look lovely hanging in my kitchen there was a small problem.

They smelled like a cross between Fritos and dirty feet. Or maybe dirty feet and smoke.

They probably didn't smell as bad as a mosh pit...but still, stink is stink.

Now please tell me if I'm not right in my thinking here, isn't a paper towel one of those things that should be somewhat sanitary?

I can see you nodding your head. So you can understand me when I say that that's what really made the stink all the more wrong.

I didn't think to say anything about the stink to Daddio, it didn't take long for him to mentioned it.

"Those paper towels sat in the stockroom where someone was smoking" he complained with a wrinkled nose and a big frown.

Imagining the enormity of the Kroger stockroom I begged to differ...maybe if they sat, open for a month in a Martini bar, but they didn't get that stench from the stockroom.

When the next couple of paper towels I used didn't smell I thought...maybe Daddio was right, maybe only the outside ones smelled bad, and it probably was from the stockroom.

Time told the smelly truth, the paper towels stunk through and through, but you had to get them wet to smell the fermenting aroma.

Kroger, I may have to sever ties with you this time.

It seems you don't value me as a customer.

You screwed with my paper towels and you screwed me out of a buck thirty five x's two.

I'm scared I may go McGuckin* on you, it's only a matter of time. 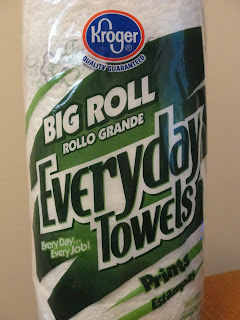 
Grocery gaze: The mindless stare people tend to have when grocery shopping resulting in a shopping cart collision..causing injury or harm to another unsuspecting person.

Cheap at twice the price: so inexpensive, that if the price were doubled, it would still be considered cheap.

Skanky bony stinky: Someone or something who is dirty, skanky, and foul.

Jipstanged : To be ripped off for an item purchased. To not receive the item you expected. To be swindled out of your hard earned cash.

Jack Johnsoned: Equivalent of "getting jacked". Being cheated out of something or duped.

Goin McGuckin: Koby family street slang (the term, coined by my sister Susan derives directly from the name of a crazy-crazed neighborhood boy who went postal (Sean Penn style) over every and any little thing. It was not uncommon for McGuckin to come over the fence wielding a dangerous hand fashioned weapon in reaction to something as simple as a cocked eyebrow...scary!

No one wants to see any one go McGuckin.
Posted by Koby at 11:56 AM