As a good Catholic I was taught that we were to make sacrifices during Lent. Lent is a season of soul-searching and repentance. It is a season for reflection and taking stock. The Lenten season lasts for 40 days.

Years ago when I was a Hershey addict I'd make the huge sacrifice of giving it up every year. Giving up Hershey chocolate was no small feat for me.This Intervention candidate chocoholic had it hidden in stashes all over the house.

Every once in a while a miniature family member would stumble upon one of my hiding spots. They would stomp, loot in hand, into the room where I was lounging and announce "I found one of mom's stashes"....my face would flame, not so much embarrassed as pissed. Wow, I'd think those little bastards kids are on to me.

Daddio didn't understand how chocolate chip cookies or chocolate ice cream were on my okay to eat list, even Oreo's made the cut...."I thought you gave up chocolate?" He would ask.

"NOOOO...I gave up Hershey's chocolate." He didn't get it.

"So, it would be okay for a recovering alcoholic to drink beer because beer is not vodka?" He'd pester on.

A "shut up and worry about your own soul." usually closed his piehole.

For 40 long (and very miserable) days I abstained from eating Hershey's anything. Around 11:30 pm on the Saturday night before Easter Sunday I'd start watching the clock and at the stroke of midnight I'd slip my shaking hand into a bag of Hershey kisses and eat till I was sick.

In the morning, still hung-over, I'd raid the kid's baskets looking for more.

I gave up Hersheys for quite a few years until the kids suggested that maybe I should sacrifice even more.

They wanted me to give up yelling and swearing at other drivers. I obliged them and turned into a driving doormat. Suffering the indignity of being tailgated and worse and having to just smile and take it.

I became a wimp and a puss, in other words a wuss.

In place of my usual "you dirty rotten tailgatin sonofabitcheeeeeeeep" I said instead "have a blessed day."

Of course when I'd slip up every once in a while and holler and cuss at a pedestrian or two, or a dummy on a bike, the kids would remind me of my sacrifice.

"Mom...you aren't supposed to swear at people" they'd say "remember you gave it up for Lent."

'That guy's on a bike, he's not in a car. Assholes People on bikes or walking don't count", I'd rationalize.

I'm attempting to give up gossiping this year. I've decided that if it is something that I would say to someone's face, then it really isn't gossiping and so I'm doing my normal amount of sharing my strong opinions and facts about others with others.

Watching my family sacrifice this Lent has been tough, they've given up some of their favorite things.  I felt some of Googie's pain this morning when I went for some milk.

She gave up pop for Lent and taped to a bottle of Vernors, one of her favorite kinds, was this note... 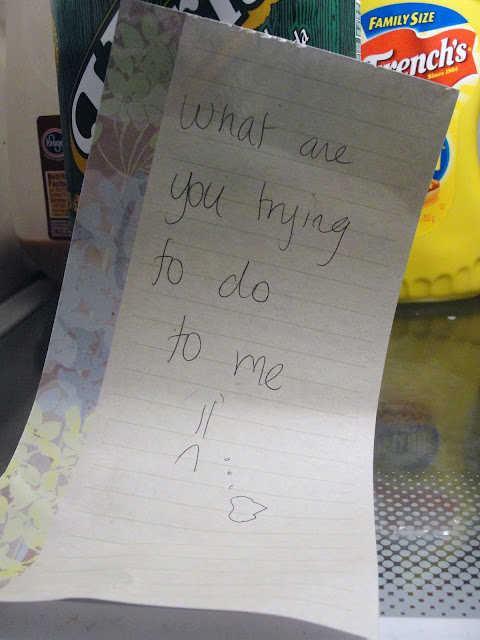 Googie, a bit of advice. Next year when you decide to give up "pop" it would be helpfull to you to be a bit more specific.
Posted by Koby at 5:41 AM