Skipping about the internet this morning I stumbled upon an interesting article talking about a funny challenge reality star George Weisgerber (I Love New York 2 and I Love Money) took.

This high maintenance pretty boy challenged himself to go without grooming for 14 days (P to the U).

Anyway, I like clean men (man) and I cannot lie...having the nose of a bloodhound it helps to have a mate who likes it too.

I'm more than greatful for his appreciation of body cleanliness. I shudder when I hear girlfriends talk of having to bribe their husbands to take a shower.

Daddio is not what you'd call a pretty boy...I mean he is pretty, but he doesn't really know it. He always looks like he smells nice, and he does. He gets that way with a bar of Dial soap and some hot water. No fancy, pearlized, peach colored body washes for him.

He shaves mostly every day, yet he still has a five o' clock shadow that crops up on his face every afternoon. I kind of like that little bit of rough, some "corporate thug" goin on.

He's never once worn cologne or aftershave or any other smelly foo-foo (as my grandpa used to call it).

And he wouldn't spritz himself if you paid him.

Daddio's sons are pretty boys. They, like Daddio, keep their nails short and clean. And they both like showers so much they sometimes take up to three in one day.

The Sweet Prince Buttercup has a baby face that is easy to keep clean shaven. Poor Bear wakes up every day with a full beard, which irritates him to no end. He spends lots of time littering the bathroom counter with small sharp shards of coarse reddish brown hair. He likes to change up his look, and daily he gets to choose to carve that facial hair into something GQ worthy and he usually does.

Unlike Daddio both my boys wear earrings and necklaces and they use perfumed deodorants that go by the names Smooth Blast, Fierce and Sporty.

And neither of my pretty boys would dream of leaving the house without a spray of some kind of delicious scent.

And he says that Googie, his only daughter, is the only real true "son" he's got.

Googie is a girly girl (in every sense of the phrase), so in Daddio's mind that declaration is the equivalent of a good ol' one two punch right in their pretty boy kissers.

And say things like "you should try it some time old man..the chicks dig this kind of stuff".

This chick wouldn't know what to do if Daddio suddenly went metrosexual.

I like my clean caveman just the way he is.

And men that are prettier than their women give me the heebie-jeebies. 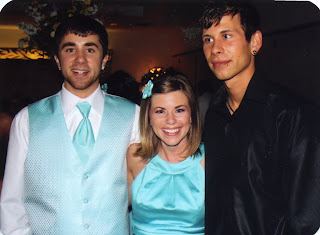 My "pretties" all gussied up and smellin like they look.

Labels: Cupcakes and other desserts