I'd rather chew on a big ball of tin foil than grocery shop. It’s boring; it’s lonely, and spending all that money on a bunch of crap the kids are going to eat in 1.5 hours just about kills me.


The job physically hurts my body, and the cruel and aggressive treatment of the other shoppers hurts my psyche. Experience Meijers on a Sunday and you will know exactly what I'm saying. It's not for the faint of heart.

The kids used to come with me to the grocery store when they were too young to stay home by themselves or when they were teenagers and I feared that if left alone for any length of time one of them would stab the other in the eye with a rusty screwdriver. Then we'd be taking a trip to the ER for a tetanus shot and I'd be trying to figure out how I was going to fit the purchase of a glass eye into an already too tight budget.

It was often easier when they came because they liked to push the cart, and load the groceries onto the belt, then back into the cart, then into the trunk and then to the house…..pure bliss.

And really, I didn't mind, every once in a while, having to slap one of them in full view of the church lady standing in line behind us when they (he) begged for a king size Mounds bar (he didn't even like coconut, he just wanted it cause it was red, his favorite color).

I pretended not to notice when one would lob a double roll of paper towels over the top of one aisle while the other tried to catch it in the cart in the next aisle.

It was a small price to pay to have company at the grocery store.

Anyway, with them now all grown up and with better things to do on a Sunday morning (like sleep till noon), I usually shop solo.

This past week when I walked into the grocery store I looked past the huge grocery carts I normally use..... 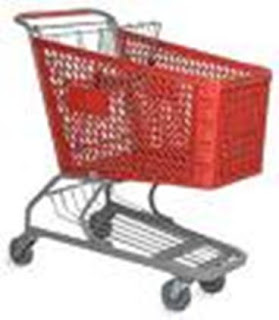 and noticed this little beauty. 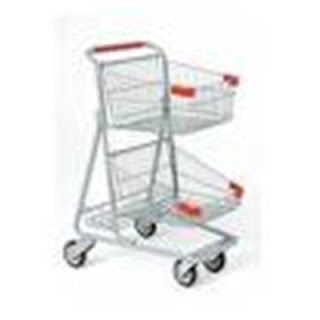 
I wrestled the miniature basket from the cart corral and was off and running. That little thing was light as a feather. The push was smooth, the turns precise.

I was in love.

No, make that lust...all it took was a few aisles to see that the little cart did have a down side...I was running out of room for all my groceries.

As I made my laps, up one side, down the other, every few aisles I would stop and readjust my groceries so that I could fit more.

I had an astonishing number of things in my tiny cart.

My lap mates were beginning to comment and one even had the nerve to say "needed more than you thought eh?"

I wanted to shoot off a witty comeback, or a dirty look. But, I was too busy trying to keep all the stuff in the overflowing cart.

I fell out of lust with the cart when the wheels copped an attitude and the cart became hard to push.

I limped to the check out lane, tired from our lovers quarrel and unpacked my goods.

As the cashier scanned my groceries we exchanged small talk. When she was almost done I pushed the little cart to the end of the lane.

The cashier glanced down at the little cart and yelled "You got ALL THAT in THAT little cart?"

When the total came to $128 dollars and 95 cents she started calling her co-workers over.

Like a carney she yelled "Come see all the stuff this lady got in this mini cart...come on, you've got to see this".

They ooohed and ahhhhed and asked again and again if I'd used ONLY the little cart. Even the manager on duty came over to see.

I was an instant celebrity.

"Is this some kind of record?" I blushed, proud of my accomplishment.

Wow, with a little imagination and a cute little grocery cart...well, the sky could be the limit. 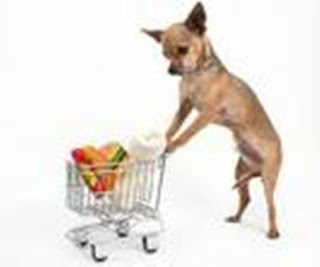