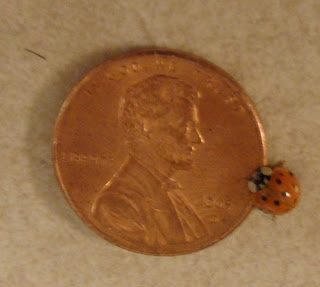 This tiny ladybug, maybe I should call her a babybug was making the rounds of my kitchen counter a few days ago. I normally kill anything that walks on my counters, but she was so damn cute, I just let her be.

She was the smallest ladybug I'd ever seen, and I delighted in watching her explore. When she climbed aboard a penny I ran for my camera.

I thought I'd post the picture on my Picture a Day blog . The ironic relativity of this little itty bitty bug being dwarfed even further by this little money had me thinking I wanted to use this picture somewhere else.

Tomorrow my baby boy will play his last high school basketball game. He'll be playing in the Playoffs, but Thursday will be the last home game.

I've dreaded this day for as long as my boys have played ball.

I wondered if I would sit in the stands, tears running down my cheeks hoping no one was looking. I was quite sure that that is how our last game would play out.

My son has had a really hard year, basketball wise. His brother was a high school basketball star and he too was a standout. Their three point shots a family tradition and source of pride.

We all tried to figure out what the hell was up with the kid. Daddio blamed the fact that he didn't practice much over the summer. I blamed the coach. I wanted to jump on his back and sink my buck teeth into top of his balding head (he really is a nice man, but you know how mothers are, right?). My son's girlfriend's father blamed his very own daughter for Bear's surprisingly poor game average. And coach said it was a problem with confidence.

Either way, about 8 games back the coach benched my son. The co-captain of the team was no longer a starter.

He'd been a starter since 3rd grade.

It hurt all of us. During the singing of the National Anthem, I'd sneak a peek at him, while he stood in line waiting for the song to end and the game to begin, I watched for signs of where his heart and his ego stood.

It hurt to think he was embarrassed. Or, disappointed in himself.

When it first happened, I ordered Daddio (if you know Daddio personally, you would know there is no ordering him to do anything) to call the coach and talk with him.

When he refused, I rattled his cage. I poked at him. I ranted and raved.

"Call that asshole and call him NOW!!!" I hissed.

Daddio told our son that if any call was going to be made it should come from the boy himself. That if he was unhappy about his bench warming/non starting position that he needed to call the coach and express his feelings.

This wasn't a small thing Daddio was asking his son to do.

Step up, be a man, take care of your business.

As stupid as this sounds, I cried (seriously cried) for two hours after this conversation. Daddio had gone to rehearsal and the boy had left to visit his girlfriend and when I was all alone I held one of the biggest pity parties of my life.

Never in a million years did I think Bear would make that call. An hour or so later he called to let me know that while his sweetie tanned, in the privacy of his car,  he called his coach and asked "why? and "for how long?" and all the other questions he needed answered.

In my eyes my soft spoken, shy boy became a man that night.

Tomorrow night I'll be so sad to see it come to an end.

But I'll also be so happy that it's over.

I am so proud of the way my son handled this bump in the road.

With patience, and grace and maturity.

Much better than his mother actually.

I hope he realizes that his life will be filled with things (problems, situations) that feel incredibly large and complicated, but when put into perspective are really quite surmountable and of course never as large as they may appear.

My wishes and hopes and dreams for him go sooooo much deeper than him doing well in basketball.

With that said, I'm still hoping for a three point jumper tomorrow.

Thanks, as always, for listening. xoxoxo
Posted by Koby at 4:16 PM

Labels: Bear, Bear and Me