This time though the whole group of them are pretty okay.

We've got the usual dynamic of more male than female youth, but enough female youth to add some spice to the boy's days.

Spice in the form of fighting over the boys we do have and boy ohh boy do those girls fight.

Just like regular high school they gather in cliques and stab each other in the back with horrible words and opinions.

Assumptions plus poor communication skills equal nothing but a big ass bunch of drama.

The male youth are so different. They don't normally exclude or gossip.

They can gather in groups of three and no one gets their eye scratched out.

Or their heart broken by betrayal of one of their own.

I've become each of the girls "one on one" adviser,  their closest confidant... a position I relish and treasure.

The problem is that there is only one of me.

Yesterday (for about the fourth time this week) I heard five different voices whisper "I need to talk to you"...

"so and so did such and such"

"and she is such a you know what"

" and today I am talking with you know who"

" and she says that she wants this and that "

Till I'm ready to scream (Rodney King style) "CAN'T WE ALL JUST GET ALONG?"

Smack dab in the middle of my work day I had to leave and go to my dad's to learn the procedure of putting his life saving antibiotics into a pic line in his arm.

The training had me dog paddling in deep, deep, dark water.

So much so that it was hard to breath.

(seriously, is it any wonder that I totally get these young girls and their overly dramatic dramatics..?)

How freakin ass hard can this process be? I thought, as I drove to his home.

Well it is that freaking ass hard.... but I will learn (you can train a monkey to do most anything, right?).

So when I got back to work (and work it is folks with this many loveables at one time) I was feeling mighty stressed.

And, as usual I was being asked to solve the problems of the females of the world...

And so as I stand elbow to elbow with them washing dishes and listening to their problems and seeing no end in sight I start to sneeze and then my nose begins to bleed...

Suddenly me and my dripping nose becomes the focal point.

The girls take a break from their cat fight and the boys from all areas of our kitchen gather to ask "what happened"...

They all want to know who hit me...

Keeping a straight face I blame one of the bigger loveables... "he didn't like what I was saying" I fib as I mop up my bloody face.

Like hitting a bee hive with a baseball bat instantly the place is all abuzz...

Laughing my immature rear off I tell them I'm kidding and that no one really laid a fist upon my anything....

I call off my frenzied pit bulls and we resume cleaning our dishes... chattering about all kinds of things, none of which are drama filled.

Who would have thought one small bloody nose could work such magic?

I spend an inordinate amount of time overworking my peacemaking brain trying to figure out ways to get these loveables' attention onto more appropriate subject matter when all they want to do is pick at one another.

I try so hard to sway negative conversations and trouble provoking actions that I've never given it much thought about how really simple a solution could be...

Until today when I had an ahhh-haaah moment and realized that I'm really only a couple of bucks and a United States Postal Service delivery away from some peace. 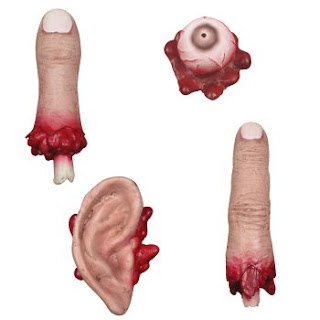 I can hardly contain my giggles.