Is there a big rock I can hide under...?

Last week was one of the worst I've ever had working with my loveable thugs.

So much so that I almost changed their names to those miserable bastar.....s

I was so proud of myself and my coworkers for deflating an "issue" that was brewing.

It had been simmering for days and was threatening to blow.

To allow it to blow would probably result into some kind of riotous conditions that would be hard to control.

Yes, it was worse than that bad.

On Wednesday, the staff did an intervention and when the day was almost done the loveables had kissed and made up.

During the peacemaking talks the hard work the loveables were doing toward making things better made me so proud I choked up while I was talking to them about it.

Like civilized human beings they were using words to solve their problems. This time there were no cuss words, puffed out chests, or fists.

I should have known it was too good to be true or to last for long.

Before the day was over so was the truce.

On Thursday all hell broke loose.

We had cuss words, puffed out chests and fists.

We also had cups of hot coffee flying through the air and hitting targets which then blew up.

If I were a betting person I'd bet that a wick was lit last Thursday and that all weekend long it did a slow burn which simmered (and more than likely was stoked and kept alive by that horrible and awful social networking bullying tool, Facebook) and today we will see the results of that.

I'd rather have my hemorrhoids sawed off and then cauterized with a soldering iron than go to work this morning and deal with all the drama (and the possible fisticuffs).

For a (self proclaimed) peacemaker, this shit takes the freakin cake.

On a lighter note,

Make this picture larger and take a good look at this goofy pooch.

The cheezy grin has keep me laughing every time I think of it. 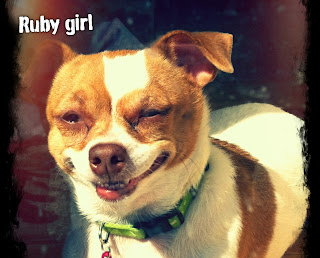 She is my grand-dog, Ruby girl.

(What she lacks in good looks she makes up for in personality.)

(Googie thinks she's the cutest dog ever...  giving credence to the saying "a face only a mother could love")