I was a really good kid saddled with unusual siblings.

Susan (my sister, the one who doesn't read this blog) and our brother John were a bit on the odd side.

A little too smart for their own good some people liked to say.

I was not as book smart nor as easily entertained (ADD) as the two of them and often found myself thinking up all kinds of stuff to do to ward off childhood boredom.

Anything to make a chore easier or more fun.

Susan and I would wash the dishes in the bathtub after we'd played baseball with the leftover mashed potatoes.

We'd haul all the dishes in the bathroom and fill up the tub, it was an awesome plan, we could both wash at the same time.

( I shudder now to think of the possibilities of what else may have floated around with the dishes in that deep tub).

In addition to dressing up boring chores we also had John to help keep the doldrums at bay.

We'd think up all kinds of horrible practical jokes to play on him.

Hold him down and put makeup on him.

Torture him as only sisters can do.

As book smart as my siblings were they both lacked true common sense.

Evidenced by their love of a game that was nothing but horribly dangerous.

Stair-surfing is nearly as stupid as downhill skiing.

The minute Marmie shut the front door the two of them would drag a mattress to the head of the basement stairs and they would ride it down.

Like moth(s) to flame(s) they had neither clue nor care about their mortality.

Be it a fatal roll-off crash or Marmie discovering the shenanigans that went on when she left the house for an hour or two.

They were playing with fire, but the lure of the thrill was stronger than the fear of punishment.

Today while exploring the wide world of Pinterest I came upon something so neat it made me wish Susan (you know) read my blog so that she could see it too.

I would email it to her but she doesn't read her email.

I could probably phone her and let her know to read my blog or check out her email.

I'd do that, but she doesn't answer her phone either.

(Believe it or not, I don't think it's personal)

(slide dowwwwwn for the image) 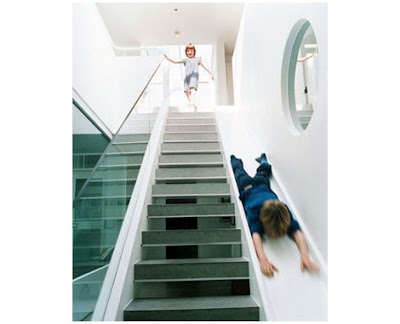 Labels: Brother John, Childhood games gone bad, Kids being kids, Marmie...I was too smart to join in, My sister Susan, Ouch, Stair-surfing, Susan the one who doesn't read this blog