I'm truly shocked at the passage of time.

Just yesterday while eating lunch one of my co-workers talked about being born in 1986.

It's 2010 which means I've been occupying space on this planet for 51 years.

And so in 51 years one can gather lots of things to be thankful for.

Suffice it to say that a set of beloved parents, awesome siblings, a loving and good man for my husband and three of the most wonderful children that ever lived do top my list.

Having a nice job, one that I love also has me feeling full of thankfulness, most days anyway.

A couple of four legged pains in the ass.

And a sturdy roof over my head.

I'm thankful that my 28 year old food processor still  helps me churn out the pumpkin rolls year after year.

And that Googie now wants to help me make them.

Well, maybe not help, but she is starting to watch me while I work my kitchen magic..that in itself is huge people..HUGE.

Every single Wednesday, the day before Thanksgiving, the kids could find me at the kitchen counter, apron splattered with egg yokes and powdered sugar making pumpkin rolls (and a huge ass mess).

In my kitchen the under the counter radio played a cassette of Christmas songs.

The cassette was a cheap one that held about four songs per side.

Nat King Cole's A Christmas Song was the first song on the cassette and my favorite.

When I would hear the school bus come down the street I would hit rewind and wait about 30 seconds to hit the play button...

Just as the first bars began the door would fly open...

"Ohhh man, moms at it again" The Sweet Prince Buttercup would holler.

And as each child came home I would do the same thing.

So it became a tradition.

Until last year when I lost the cassette.

Which I couldn't have used anyway since I have a new under the counter unit that plays CD's instead.

Yesterday as I worked I listened to another cheap Christmas CD from my collection... sadly it just wasn't the same.

Googie and Trouble sat at the breakfast bar and called out ingredients to me as I baked.

Thanksgiving day 2010 I obviously have tons to be thankful for.

Before dawn I found myself with an ear to ear smile when I saw this sitting next to the coffee pot this morning...Trouble promised to make me a new day before Thanksgiving traditional Christmas Song CD (just exactly like the lost cassette)...and he delivered (just like I knew he would). 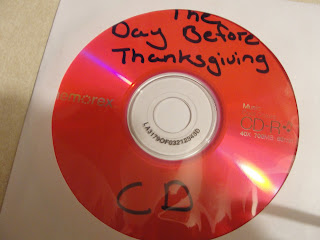 Oh and left next to my new CD was a dessert plate with a forgotten blue-ish green blob sitting next to an orange tulip, I plucked it off and dropped it into the garbage.

The Divine Miss M (the love of Bear's young life) most certainly left it there.

She chews lots of gum and she giggles a lot too.

Seems Bear has picked a girl just like the girl that married his dear old dad. 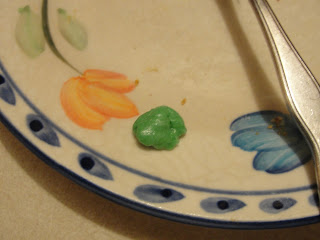 Happy Thanksgiving Day....may your blessings be many.
Posted by Koby at 7:22 AM

Labels: Gum on plates, Holidays, Pumpkin rolls, The Divine Miss M, Things I am thankful for