I had so many stories to tell you, but a stomach bug derailed my plans.

So yeah Thanksgiving is sooo last week...but if you don't mind I'd like to share a few tidbits with you.

Thanksgiving day at my sister (who doesn't read this blog) 's house was a lot of fun.

In typical Susan fashion she set one of the most beautiful tables I've ever seen.  (This picture honestly does it no justice)

When I walked into the room and saw the festive table it triggered all sorts of horrible childhood memories.

Memories of that little hootchie out-doing me.

It took me right back to grandma's house and Barbie dolls.

Which really was all that and more.

Susan would con our grandmother out of a couple of her fancy-dancy paper towels to make matching bedspreads and curtains.

And sometimes grandma even let her have two different patterns, so she could do more than one bedroom.

On the walls of Susan's Barbie mansion were miniature replicas of famous art work...she'd cut pictures out of catalogs and magazines.

Then fashion frames out of toothpicks to outline them.

Which she either painted or colored to compliment the picture it held.

My Barbie house was a bit of a hot mess.

And so we didn't spend much time there.

Instead we visited Susan at her Barbie's mansion.

My jealousy manifested itself by coming out in aggressive Barbie play.

My Barbies were the mean girls.

They'd visit Susan and her dolls and wreck havoc on her lovely home.

For instance, after a night of heavy partying my Barbie would crash at Susan's mansion and in a drunkin stupor she'd pee the bed.

Sometimes my Barbie and her boyfriend Banana Head (some Brillo-pad textured yellow-headed GI Joe knockoff) would get into a knock-down drag-out fist fight at her mansion and tear the place up.

It got to the point that Susan didn't invite me and my Barbies to play at her Barbie mansion.

And I found out a couple of years ago that since that time Susan had been holding a grudge.

It all came out when she refused to allow me to play Barbies with her young daughter.

"Aunt Beth doesn't like to play Barbies" she carefully explained....then hissed in a low voice so that only I could hear "she's a FREAK". 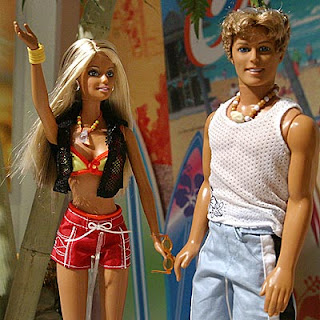 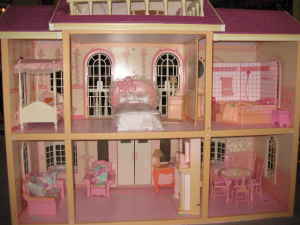