Dr Phil says that when we repeat a behavior (good or bad) we usually do it because we are expecting (and getting) a "pay-off" of some kind.

We have a relatively new loveable at work. He's been getting into and causing some trouble. He likes to sleep through class coming to lunch with odd lines and spots of redness all over his sour-puss face.

Eyes down, he grunt-mumbles "thanks" or something that resembles that when I pass him the plate holding some lunch.

I make it my job, my mission, to figure out some way to figure him out.

Sometimes, their issues are too deep, too troubling, too much for a soft hearted motherly type to understand, let alone "fix".

I know I'm not there to fix them, I don't have credentials to do so ...but for some reason, I can't keep my fixing to myself.

Yesterday his Probation Officer gave it to him right before my class.

When the PO's talk, the loveables listen.

Usually with respect, and instant obedience.

Until they walk into our class kitchen.

Where their language, body and otherwise, tells the tale of their frustrations.

Yesterday, Sleepy, the red-faced loveable was in such a mood.

I told him in my motherly "I am the boss in here" fashion that maybe he should work by himself today.

That some alone time would do two things, allow him time to think, and take innocent bystanders out of the line of his "crabby-ass crossfire."

I felt a crumb being tossed my way when I thought I saw the sides of his mouth turn up.

The "ass" remark had hit the target.

I gave him a wet cloth and the unclear (to a teen) direction to "clean the place".

I lingered in the kitchen for a bit and chatted with him while he worked.

Without trying to shove any religion down his throat I told him about a friend of mine who cleans for a living.

"You can't imagine the talks I have with God while I scrub toilets" she tells me.

When I tell the loveable this I get another crumb.

"Wow" I say when I realize that I'm yakking his little red ear off  "I told you that I was going to give you some time to yourself and  I've sat in here and talked non-stop like a fool for 20 minutes".

"Yer alright" he says as he washes the stove using some old fashioned elbow grease.

I praise his work and ask him if I can take him to my house to clean?

"We all want success for you" I say to him "do you  understand that?"

I tell him a story I heard once on Oprah...(I think) a story about two wolves.

I don't remember it verbatim, so I wing it.

A grandfather often told his grandson a story about two wolves. Two very different wolves that live inside of him. "One was angry and mean and ready to fight all the time. Filled with rage, this wolf.  The other, the exact opposite. A mighty and powerful wolf too, but soft and accepting. This wolf saw good and rightness in the world and in himself." the grandfather told his young grandson.

"They fight ALL the time" grandfather said.

"Horrible fights. They will fight till one of them dies" grandfather continues.

"Which one do you think will win?" asked the young boy.

He continued scrubbing, then stopped and looked up at me.

He looked me right square in the eye and he smiled.

This day, my pay-off makes me rich beyond measure. 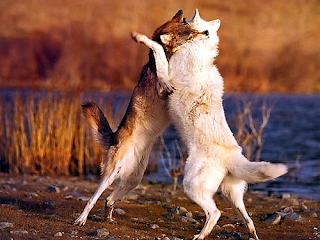 Image of two wolves borrowed from this website...
designyournewlife.com
Posted by Koby at 6:02 AM

Labels: A tale of two wolves, Cleaning toilets and talking to God, Sleepy the red-faced loveable, The Loveables