My sister Susan calls me a Jamaican.

With all due respect, she is basing her assessment of the appropriate-ness of this nickname on a skit from Saturday Night Live.

On this particular Saturday Night Live skit the Jamaicans are portrayed as an abnormally hard working bunch.

They've lots of jobs and are always thinking of ways to make a buck.

Not to get rich, but more to make ends meet.

Although I guess if one got rich on the way there would be no complaints.

Bear, my youngest son takes after me in that way.

He's not one to sit idly by and go broke, or without.

A few years back he decided that he wanted to buy a new game system using his birthday money, the plan had a fatal flaw, he didn't get enough money in his birthday cards for that large a purchase.

If you'd been able to observe him in the days following his birthday you would have totally seen the wheels turning in his head as he tried desperately to figure out a solution to his deh pon di gully side.

Bobbaat! if that little sucka didn't think up the most crawful plan.

He'd buy up all the old games his friends wanted to get rid of, paying the same low cash price that the video game store was paying.

He then took the used games to the video store himself and turned them in for store credit which was much more generous than the cash offering.

He had enough to then buy the system and a new game....

For his real and official job Bear is employed at McDonald's where he claims he's getting lots of pimples and not a ton of cash per hour.

I think it does him good to see how the other half lives...

An honest way to make a buck, however, he's determined that this will not be his life's work.

But for the time being it will do.

Bear has lots of aspirations and most of them require more flow than he can make in a reasonable amount of time working at MickyD's.

Things like buying his lovely girlfriend a hot meal on Saturday nights.

I had the usual mixture of pride and "what in the hell do you think you are doing now...?" feeling when I saw this sitting on the laundry room shelf... 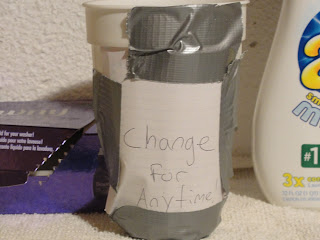 Far be it for me to live a luu, so I left it there and filled it as I stumbled upon loose change left in pockets and found in the bottom of the washing machine.

PS... I missed you, and if you are reading this I thank you for coming back.
Posted by Koby at 6:20 AM

Labels: Bear, begging, I loves me some Jamaican kid, Jamaican things, money left in pockets, Money making schemes, one day he probably will be a rich man, pan-handling