I seem to have misplaced...

Here it is November 1st, 8 weeks from Christmas and 9 weeks from 2011...just a few days ago I had the satisfaction of not having to cross off and initial 2009 on the check I wrote at Meijers.

Where did this year go?

I'm not the only one suffering from what the hell day, month, year is it...?

I called The Sweet Prince Buttercup on Friday to check in.

Just as I was hanging up I said to him "Ohhh, wait a minute, before I let you go is there something.... anything that you want to say to me today?"

(It's kinda reassuring to know I'm not the only one going senile.)

I reminded him that we celebrated my birthday over a month ago.

"Is it your anniversary then?"

(He's a good kid who sometimes needs a bit of prompting.)

For our anniversary we went on a trip.

Just Daddio and I and the open road..it was incredibly romantic.

We hit every thrift store within miles of our home looking for a black suit Daddio could wear as his Jake Blue's (Blues Brothers) costume.

"I don't think I could take the stink anyway" he eventually admitted after we'd searched every stinky store in the area and came up empty handed.

(Every store we visited had me aching to disappear and take a look around.

I knew I couldn't do any real shopping with you know who with me...

He once even accused me of buying back my own donations...)

Then on to a dreamy dinner.

Old Chicago Pizza, my choice.. I love pizza almost as much as I love Daddio and the kids.

Even the waitress was skeptical as she sat it on the table... "wow" she said "now that's a well done pizza"..

Daddio and I agreed, the first piece was pretty okay

Then we both almost choked on the pepperoni dust.

The pizza made it to morning on the counter..

The ultimate test that proved it was garbage.

All weekend long I suffered a horrible headache.

I was near Googling "flattering black dress" for my own funeral when I suddenly remembered getting blasted from behind by a lady with a very powerful sneeze last week at church.

My weekend in a nutshell.

Oh, that and I finally got an answer to one of my age old questions...

What the hell kind of crazy ass people dress up their pets????

Those with no tiny people around, that's who. 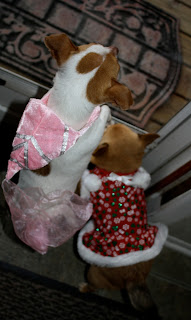 Edited to add: I wanted to make sure that I told you how much I appreciated the very sweet happy anniversary comments, I really did appreciate them..you are all too kind. xoxo﻿
Posted by Koby at 6:37 AM