You need to give up the shit that weighs you down.

Busier than a cat covering... well, I don't want to say shit twice in the same post.

I have to pretend to have a bit of class.

So the plans for Googie's wedding shower are in full swing and a henfest is taking place most every week now.

Her female relatives (present and future) gather together in rooms.

Well, my thoughts usually take me to the action of emotional grazing...but that's a novella for another day.

Susan (you know, the one who doesn't read this blog)... was there there last night.

She started her usual shit crap stuff... talking ish (my grandmother's word for shi*) about our younger days.

Of course when she got to the good parts she started snorting and blubbering so bad it was hard to tell  what in the hell she was talking about...

Bent in half, shoulders heaving, nearing a tearful hysteria...Susan reminisced about our childhood.

She attempted to portray herself a victim rather than accomplice of my evil big sister antics...

The debaucheries had to have a mastermind...

After all these years the truth can come out...I was simply the big thug following orders.

Want to fly..? Get rid of the shit that weighs you down.

Which can be accomplished by a good old fashioned knee-slappin cackle fest... or a discovery which brings about a sprinkle of unexpected joy..

Something silly and lighthearted, like a smile from your banana. 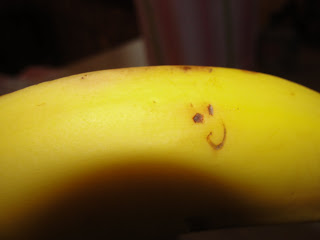 Labels: Messages from the fruit nation... youthful tales of ish and other childISH rubbISH...