Daddio has a date in court this morning.

Seems his foot was a tad too heavy on the gas pedal a month or so back.

A cop took offense at seeing him whiz by going over the posted speed...

wayyy over the posted speed.

Now Daddio hasn't had a speeding ticket for years, lately he's into relaxed Sunday driver mode..tooling along at usually just about 5 mph under the posted speed.

This particular day Daddio had taken a treacherous jaunt over to Ann Arbor to see a guy about an amp.

On the way there he encountered a myriad of irritating drivers, tailgaters, lane hogs, texters and an entire Retirement Village of blue hairs.

On the way home he ran into a butt load of construction and a dead train.

The dead train was the catalyst that catapulted Daddio to offender status.

Well that and his overfilled bladder.

Since the train was dead and hadn't moved in almost 30 minutes Daddio's patience was at a negative and pulled a u-ie and gunned the car engine like he was preparing for take-off...

Anyway, today is the day Daddio learns his destiny.

I wouldn't normally be talking this over dramatic about a simple traffic ticket...but Daddio got me to thinking last night just as I was about to drift off to sleep....

"Well, tomorrow I'll probably end up in the State Pen" he said "I'm goin up the river"...

"You go ahead and get remarried" he generously offered "don't wait for me".

I smiled in the darkness at his silliness.

Some time in the wee hours of the morning I woke with a start.

Daddio was going to jail.

As clear as the day it happened I had a memory of sitting in court next to Daddio.

We both watched, transfixed, as the man with the gavel spoke and judged person after person.

Each and every person...

And then came Daddio's turn.

Fresh off a diet of too many Clint Eastwood movies and The Billy Jack Trilogy certainly had my young Daddio not thinking straight as was evidenced by the following exchange.

After raising his hand and swearing to be be truthful, Daddio looked toward the Judge.

"How do you plead, young man?" the Judge asked.

"Ummm, does it matter?" Daddio asked smugly "does it really even matter what I plead?"

Holy freakin shit...Daddio just said...  "does it matter what I plead?" to the Judge!!!

"YOU SIR ARE ASKING...NO SIR!!! YOU ARE BEGGING... FOR A CONTEMPT OF COURT CHARGE" Mr Judge spat at a grinning Daddio.

The Judge's nostrils flared and he glared at Daddio over the top of his reading glasses.

He tapped on his desk waiting for a more appropriate response.

The rest of the story is a blur.

Luckily, Daddio came to his senses and made the wise decision to play by the rules.

But he'd angered the Judge and he didn't go easy on him.

Daddio paid a hefty fine for his freedom.

I hadn't thought about that day in court for years....

Daddio was a young kid then, filled with ideas of right and wrong.

Billy Jack and Clint Eastwood would have been proud.

In real life Daddio's learned a thing or two along the way.

More than likely he'll be a bit intimidated and genuinely respectful today in court.

And he'll keep his trap clamped.

I don't have it in me to break in another one. 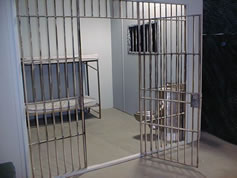 I'm printing out this picture and stapling it to the court notice. A little reminder of all the comforts of his potential new home.
Posted by Koby at 1:25 PM

Labels: Billy Jack, fighting traffic tickets, I love you Daddio, RESPECT and playing the game will get you EVERYWHERE, You fill my heart with laughter