Bear caught a bad, bad bug and thought he was on his way to meet his maker.

How, I wondered, am I going to send him off to college a couple of hours from home when a virus has him calling me at work predicting an impending death...?

Well, to be fair, his temp was over one hundred three degrees.

As any cleaver opportunist would do I totally jumped on the chance to kick him when he was down..and while wiping his sweaty brow said things like,

"Think my broom will make the flight to your bedside when it's two plus hours from home?"

"You can try, but you aren't going to find any roommate that can make chipped ice like I can"

"You're not ready to wean yet, mister, that SOS call is total proof"...

I was pretty annoying.

Desperate for him to change his mind and decide that he isn't ready to go had me pulling a butt load of tricks and trip-ups from my haversack of mother's little helpers.

Sick humor, guilt and confidence busters... I got em all.

It was a true Good Friday miracle what a good sawbones and couple of powerful drugs can and will do for an ailing young body... the next day the kid was good as new and still on that damn college away from home kick.

We had a lovely Easter... and dinner at my sister, "Martha"Susan"Stewart's" house.

The festive ambiance of her house was enviable.

The mishmash of crap that she's accumulated over the years has turned into quite the lovely collection.. seriously, her mantle and table were beautiful.

She had (what appeared to be) an antique Winnie the Pooh and Christopher Robin pail on the table as a centerpiece.

A couple of multi tiered glass serving dishes waited patiently on a side table for Susan to fill them with homemade fudge.

A platter of deviled eggs with a perfect dusting of paprika sat opposite the flowers.

Tempting all of us to take the first one...

Only one of us was nervy enough to dig in before dinner.

That particular guest had four legs and lightening fast reflexes.

Once she'd helped herself to a sampling of the egg filling Daddio carried the platter of eggs to where Susan cooked.

"Ummm.." he said "looks like the seasoning has been licked off a couple of your eggs"

The white dog tried not to look guilty...in spite of her paprika red and yoke yellow tinged beard.

With a smile Susan deep sixed the three "tested" eggs and set the platter back out.

The remaining nine served as a decoration.

Daddio's mom made a friend for life when she slipped half her meal over the side of the table and to the waiting dog.

She even fed it a large blob of snow white butter cream frosting right off her fork.

Luckily we got out of there before the dog came down with the shits.

And not so lucky I came down with Bear's virus.

And eerily, I look a bit like this chick...only my nose is red and the circles around my eyes are black. 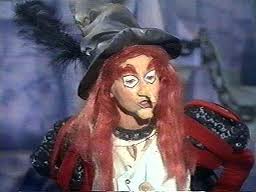 Labels: Dear Diary, My sister Susan, Susan the one who doesn't read this blog, Susan's dog likes deviled eggs and other people foods