Which means finding clothes that fit, outside of the toddler section, usually proves to be a definite wild goose chase.

So when she found some in the "big girl" section of a local mall...she was beyond thrilled.

They couldn't be totally perfect...(because that is just the way the mop flops when it comes to Goog and clothes shopping)

But things were certainly looking up when the waist checked out, and the rear was just about the right amount of snug.

Googie was in new pants glory.

Three new pairs of pants to wear to work.

Friends, you have no idea what a monumental thing this is...

Googie now has pants that fit.

Googie was so high on the excitement of finally finding some grown up pants that fit that she didn't even complain that they were each about a foot too long.

Since 8 inch stiletto eff-me pump shoes are really not an intelligent "fashion do" during a Michigan winter..(not that Googie has any of those anyway..so far she hasn't been able to find any in size 3, other than in the Barbie dress up section at Target )...

that meant... we needed to locate a good seamstress.

A seamstress who could work some hemming magic and transform Googie's new pants into wearable.

We called around and got basically nowhere.

The prices quoted were outrageous and the wait time even worse.

Googie was getting discouraged.

Then we called Aunt Sue (aka...my sister, the one who doesn't read this blog) to see if her short self had any ideas.

She suggested the Jeans Store near the mall.

The Jeans Store, although a fixture for over 40 years was somewhat of a mystery to this shopaholic.

I'd never set foot in the place.

But you know, we were desperate.

I called and the man answering the phone said they did alterations...on the spot.

I thought I was in the Hip Hop underworld when I stepped into the door of the Jeans Store.

The Hip Hop Underworld of Knock Off Goods and Services.

When I asked for clarification that the alterations were done on site, the young man at the front nodded toward the back of the store.

I turned expecting to see someone with a measuring tape around their neck, bi-focal glasses perched on the end of their nose, a box of straight pins held in their waiting hand...

in the rear corner of the stinky little store sat a lone sewing machine,

and behind the sewing machine squatting on a tiny stool was the meanest looking little old person I've ever seen.

She was hunched over the machine, working,

and so covered by an over sized, tattered, poop colored down (puffy marshmallow) coat that all you could see was her top half.

Her looooog black-gray hair was disheveled, to put it kindly.

She had a black patch over her one good eye and a burning cigar butt dangling from the side of her chapped lip.

One chipped, brown tooth poked out and rested opposite.

(Okay, I'm embellishing a bit here, but remember, it is my blog ).

At that defining moment I should have judged this book by its cover.

(Seriously...Mom that advice is crap.)

When she growled at me when I attempted to ask her a question I figured that English was probably not a second language.

Googie came out of the makeshift fitting room wearing her too long pants.

The young man that was working behind the register came over and placed a pin..(very, very half-assed I might add) near the area of the pants he'd hitched up..marking the place where the pants would rest on Googie's shoe when the alterations were a done deal.

(Now that was a real big RED FLAG)

The young man said Googie could pick up the pants a couple of hours later.

The alterations would cost ten bucks per pair.

Later she called to let me know that she'd picked them up and that the hems looked a bit sloppy.

(Well, really what the hell do Googie and I know about hems...? If we knew anything we could have sewed them ourselves in the first place).

The next morning I was out shopping when Googie called me to tell me all about her pants.

She'd just put them on.

You thought I was going to say that something was wrong...right?

When she later modeled them for me I did what any supportive mother would do...

I collapsed on the floor in hysterics.

Normally this would send me into "frothing at the mouth" angry...however, I just peed my pants.

And howled so damn loud I scared the dog. 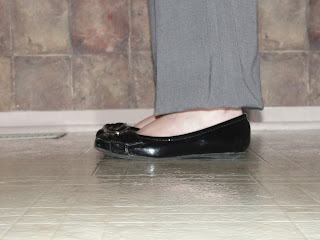 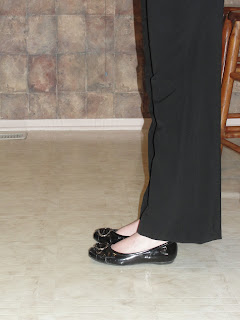 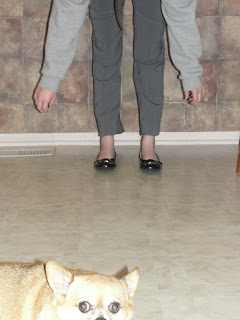 I'm thinking about asking Aunt Sue to take Googie and her too short pants back to the Jeans Store.

She can tangle with the cigar smokin seamstress.