About a year after Daddio and I started our decades long love affair he began talking about a time when he would get his own apartment.

"Buddy, when you get done paying me all the child support and alimony any in their right mind Judge would award me, you won't have jack poo to pay for an apartment..."

"and besides, you can't live without me"

"I'm certainly willing to give it a try" he usually replies.

This past weekend Daddio and a coworker (male, you dirty minded people) had to go out of town for a work training.

I tried to prepare him best I could as they were leaving straight after work Friday evening.

"How bout I pack you guys a couple of bags of chips and some pop to have on the road" I offered.

"Nah, we can stop at a gas station on the way" he responded.

"You probably should pack a fan, you know how those hotel heaters are ".... I cautioned, imagining him burning up.

"You worry too much" he says, annoyed.

The dozens of other warnings I issue serve only to annoy him further.

Do you have enough money? Did you pack your phone charger? Shampoo? Picture of me? (tee-hee)

Do you know where you are going? What will you eat for dinner?

Do you have more than one pair of sweats...?

"Okay then, but if you do, and remember, no one ever really plans to shit their pants, (that is why it's called an accident, d'oh) it's far better to be prepared."

Googie and Trouble were also out of town this weekend so when Daddio set off for his overnight adventure that left only poor Bear for me to mother.

"You ride down on your butt, right?" I quizzed him.

"No Ma" he said crossing his arms across his broad chest " I stand up with my arms like this and toss myself down the front of the icy mountain"...

"I don't think we have any of those snow pants that will fit you" I say, wondering how it is that he will keep warm.

"I'm a grown ass man" he says "I don't wear snow pants anymore. And you're really getting old. Do you realize that last week you asked me seven times if I like cherry pie? I don't. Stop worrying"

"What does cherry pie have to do with you taking a head first tumble off the sled and becoming paralyzed? Or freezing to death because you didn't wear proper clothing?"

In spite of the fact that he is a grown ass man when he heads out the door I say a prayer that he lands softly on his long-john'd padded butt and not on his hard head.

With no one else to take care of I call to check on Daddio and he reports that they are fine and have made their destination and will soon be in pursuit of a good, hot meal.

"Hey, you shouldn't drink while you're out and about in that strange town. You could get lost or robbed or murdered"...

I call Daddio a second time to say goodnight, he sounds sleepy and says he's turning in early.

The following afternoon when I talk to him he is done with the training and on his way home.

"I didn't want to tell you this" he says when I ask him how things went "Tom didn't come with me, I'm alone".

"The hotel was in the middle of nowhere. I haven't eaten since yesterday, the hotel restaurant is only open for 4 hours a day and I missed it. All the vending machines were empty. In the middle of the night, after being woken up every hour on the hour due to the small animals in the room next door I decided to go to my car and rummage my lunch box and found (thank God) a Rice Krispy Treat. I didn't get any sleep, the hotel heater kept going on and off..it was terrible".

"I should have brought a fan" he said.

"And you should have let me pack you some food" I added.

"Well" I said soothingly "at least you didn't shit your pants".

I was at the grocery store when he got home, he got a bite of food and crawled into our cozy bed.

He was snoozing when I returned.

Feeling like we'd just survived a Wife Swap episode I ran and jumped on him and gave him a big kiss..

"You look prettier than I remember" he said sleepily.

That poor man, he must have had some trip.

When he got up you can best believe that I did indeed take my God granted golden opportunity to remind him again how horrible it would be to be in his own place, with no one to take good care of him "no food, no sleep, no sex" I said.... WAIT A MINUTE...you didn't get a hooker, did you?

On a side note... Bear made it home in one piece. Googie and Trouble made it home too. And my granddog's mum sent me an email...

"Thanks for having me" said this one 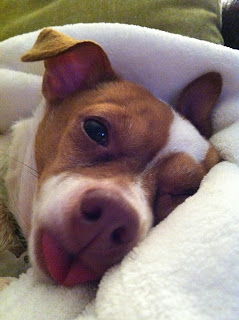 "Happy to be home" said the other 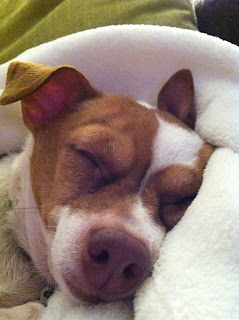 Labels: Ask me.. I know it all, Bear loves to be overmothered, Daddio missed his mothering wife, Prettier than I remember, Ruby missed her mom and dad