Yes, the mouse came back. And he brought a friend.

On Saturday (after a couple of Jimmy Beams and diet Pepsi) Daddio had the misfortune of seeing a mouse in our house.

He was in the basement and heard a noise. He opened the door to a small room where I keep hair stuff, vases, flower arrangements, in other words, a stash of crap. There amidst the perm rollers, the hair coloring and a pot of fake daisies was a little black mouse.

I figured that Daddio had seen the mouse running along the floor...or that he'd seen it scurry under a door.

When he told me that it looked him square in the eye, approximately 5 feet 9 inches off the ground, from its perch on the third shelf, second from the top, sitting, (like it owned the place) on my container of acrylic paints...that about did me in.

Daddio ran to the garage and went to work setting a trap. He generously shared the pizza he was eating and placed the mouse's share on a little old fashioned wooden mouse trap

He carefully walked it down the stairs, set it on the ground and bid the mouse "bon appétit”.

(He didn’t really say exactly that, I wanted to try out the free online translation site I just found.)

The next morning I followed Daddio down to the room to see if the traps had done their job.

They were both empty…not only was there no little mouse cadaver…the pizza was gone too.

The trap was licked clean.

“Oh sweet Jesus” I cried. “Let me guess, we have a smart mouse in our house.”

Daddio quickly figured out the Jimmy Beam and diet Pepsi had clouded his normally very sharp mechanical mind and that he’d set the traps wrong.

He got to work and set them again. This time he used a tiny piece of bread and a small blob of peanut butter.

The following morning was an almost total repeat of the day before.

This time when we opened the door we saw the little black mouse, dead as a doornail with some peanut butter still on his little lips. (I can't be certain that it was in fact peanut butter on it's little lips or that it even had any little lips I didn't really get all that close...I let my imagination run wild sometimes).

“Where is the other one?” Daddio asked, looking puzzled.

“There were two traps” he said.

“ There were TWO? Find it” I screamed and tried to run for the stairs.

Daddio moved some large pieces of wood that were in the little room and he heard some rustling.

Something was back there.

“Oh man” Daddio said…”there is another one and it's stuck to the trap, still alive”.

I wanted to get the vacuum and suck it up or find a big shoe and clobber it.

Daddio got the trap, with the mouse still attached and went into the garage.

He yelled for a pair of gloves, which I dutifully delivered.

And Daddio, who can now add Amateur Veterinarian Surgery to his repertoire of vast and unusual talents, went to work trying to save the miniature house invader.

"I think he lost a limb",  he later told me. "Hopefully he will be able to survive with only three."

(Yeah,  I'm sure he will survive and then we will be duty bound to provide housing for a handicapped mouse and a couple of his friends.)

Later when he went to check on the poor maimed thing the mouse hadn’t moved from the spot where Daddio left him.

“What a way to start a day, I had to kill it” Daddio said with a broken heart. “It was too hurt”.

I've taken to wearing combat boots when I go downstairs to do laundry. 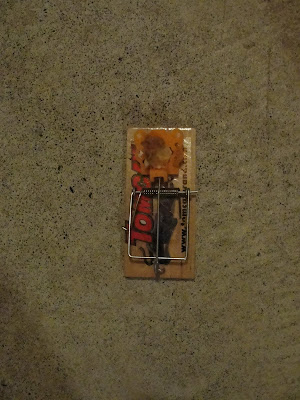 The "accident" site.
(Thanks for listening....)