When Ruby gets her period.....

Daddio is a man who takes his responsibilities seriously. Since he’s been laid off I haven’t so much as touched the washing machine, or lugged a heavy, overflowing hamper down two sets of stairs.

I haven’t emptied a bathroom garbage can or vacuumed a floor either.

He’s the kind of guy that gets the job done, whatever that job may be.

He likes to rub it in to me that he’s able somehow to keep the laundry caught up, something I never seemed able to do when I was the Stay At Home Person.

Using his managerial mind he figures out a plan, executes it and just like that we all have clean matching socks and fluffy, perfectly folded towels for our showers…and he still has time for an afternoon snooze.

While the poor guy hates being home, he is making the best of it by doing his best.

But this laid off life is not all it’s cracked up to be and Daddio is starting to show signs of wear.

He’s beginning to have a few words with me about my messes, “Everything was clean, till you walked in”, he says. “You’re like Pigpen…a little cloud of dust follows you everywhere you go”.

The kids are grating on his nerves. “All they do is eat and lay around watching TV”.

And he’s showing signs of getting a teensy tiny bit aggravated by the two small dogs that live in our home. He says things like “if that fu**ing dog looks at me one more time I’m gonna kick her teeth down her throat” and “ I’m gonna let them out the front door to pee this time, hopefully they’ll both run away.”.

Daddio doesn’t hate animals (honestly, he doesn’t) he just hates being laid off.

This morning our dog Ruby is getting spayed. We really shouldn’t be spending the kind of money dog surgery costs right now, but I don’t see that we (I) have any choice.

I have to do this before Ruby gets her period.

Ruby came to us from a not so stable home. She bites her nails and eats her poop. And while I consider her house broken, she still pees in her crate. My girl child is nuts about the dog and promises that when she moves out, the dog is going with her.

In the meantime, Daddio and I are responsible for her upkeep.

Last year about this time we began to notice that something was going on with Ruby. I’m not going to go into graphic detail here but suffice it to say that the dog’s lady bits began to change…they started to grow and before long that area was HUGE…. (HUGE!!!!).

Within days the grape sized body part morphed into a walnut sized dangling bit and was seeping a red fluid and I was wondering how in the hell do responsible pet owners find themselves with a dog in heat???

I was also wondering how in the hell I was going to keep the “heat” off of my carpet, my rugs and my white kitchen floor?

I bought some doggie diapers to contain the mess. Ruby tore them off.

I tried duct taping them and she ate through that too.

Finally I bought a pair of doggie panties and custom cut a women’s panty liner to fit inside. The sticky on the pad allows it to stay in place. The panties have ties on the sides so I could make it snug and that seemed to work okay.

Changing that damn pad was another story….gross, doesn’t even begin to describe it.

This went on for two weeks…..for TWO FREAKIN WEEKS I had to change Ruby’s sanitary napkin, numerous times a day.

He gets all squiggly and squirmy and does a visible shudder when I even just mention periods or vaginas. His eyes widen and he shakes his head “no” if I so much as begin to talk about that kind of stuff.

I could have had some real fun with Ruby and her period….

“Honey" I would have said before I left for work "Ruby will need to have that pad changed every hour. And when you do, you will need to give her hind quarters a little sit bath, either that or you could use my spritzer water bottle, warm water and a bit of soap…your choice. But it does have to be done every hour…if not, you could find yourself with blood and mess all over the place.”

“Oh, before you start you may want to get the Vicks Vapor Rub and place a dab under your nose…dogs have a gawd awful odor."

“ Be real careful when you pull the pad off, sometimes the stuff just sprays everywhere, and you surely don't want any of that on your hands...stains like crazy.”

Let him dog my homemaking abilities....

Daddio was pretty lucky this time, Pigpen has been known to hold a grudge.... 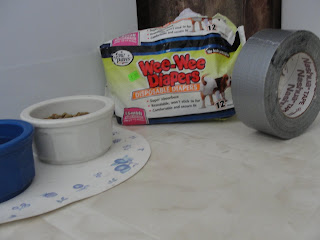