"Mom" he whispered, touching my cheek.

Nothing and I mean nothing moves me faster than a kid, inches from my sleeping face in the middle of the night whispering "mom".

"Something happened" he said

Daddio began to stir and wonder aloud why in the hell we were carrying on a conversation whilst he was trying to get a bit o shut eye.

"He wants to tell me something, I'll be right back" I told him.

I followed my big hairy man child into his sister's room, where she sat in her bed, waiting for us.

"I told him to wake you up" she said.

His story begins at the railroad tracks near our home. On the way home from his girlfriend's house he was stopped by a long train. A nightly occurrence on this road. The tracks lead to a train yard on one side of this intersection. Trains go back and forth between three different tracks. It's common to see them unhook some of the cars and then send them up a different track to meet and connect with a different train.

As my son waited, he watched as the two trains' separated and jockeyed around. As the new neighboring cars were about to connect to each other my son saw a man on a bike become tired of waiting and begin to cross in-between the two railroad cars.

"He just made it to the middle mom" my son said "when one train sped up to connect with the other. The guy's tire stuck in the track and he fell off the bike. I watched as the train grabbed his bike and bent it in half. I got out of my car and ran and pulled him off the tracks".

Did you ever see someone laugh and cry at the same time?

"Oh my GOD...YOU WERE ON THE RAILROAD TRACKS WITH A TRAIN"...hysterical mother of a kid who challenged a train screeches.

"Right when I got him off, the trains connected, and then they cleared the tracks" he explained.

"He was all bloody, his mouth was cut and his finger was bleeding and looked broken" he said

My son went on to tell us that the man thanked him and said "bless you young man". He then left his bent, broken bike and started walking".

"I picked him up and took him home mom" my hero said. "He was hurt and it was cold".

My heart's split personality was at it again.

GOOD BOY, I thought. You listened when I said to be kind and giving.

YOU IDIOT, I thought...didn't you hear a word I said about strangers and dangers?

He tells a good story and we couldn't help but laugh when he got to the part of the stranger being in his car "yeah ma, the minute the door closed and we started on our way, that short ride turned into one of the longest of my life while every scary movie I ever watched replayed in my head. You know where the dumb kid lets the murderer into his car?"

"He was high or drunk, wasn't he" I asked

"Yeah" he said "I could smell booze".

It took me hours to get back to sleep.

I wrestled my conflicted confused heart all night.

My son could have been hit by a train.

My son is kind and generous.

My son could have been a statistic.

Finally I came to a conclusion.... 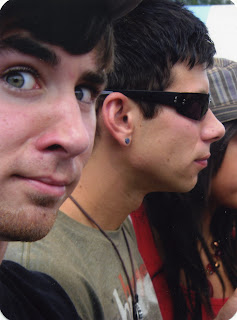