Actually, they were young wrestlers in stretchy singlets, fighting for all they are worth to make it to a State Championship.

My nephew is captain of this team. He's gone undeafeated this, his senior year.

My daughter and I were the slack jawed spectators seated in the second row watching, with horror, our first ever wrestling match (her sweetheart was with us, he used to wrestle so this was nothing new to him).

The intensity and the noise took me by surprise. The animated coaches made me giggle and point.

When it came time for my nephew to compete, I'd gotten over the shock of seeing heads and necks being bent and twisted to odd and very dangerous looking angles. I was beginning to not wince at seeing unnatural bulging of quadriceps and every other muscle group located in the human body.

I was totally and completely into the Dance.

I watched as my nephew got into the zone...he paced back and forth and shook his body, right then left, then paced some more. Finally he bent his neck to one side and then the other, bent at his knees, went up and down and down and up and this fine tuned machine was ready for attack mode.

With his ears covered and a colored band on his ankle he stepped forward, he crouched down low and rocked forward to shake his unlucky opponent's hand.

The striped official blew his whistle and the "B Man" went for the juggler.

B-Man, you impressed the holy hell outta your old Aunt Beth.... I coulda (shoulda and woulda) been your biggest fan.

Maybe you heard me yelling and cheering for you?

I love you Brett and you truly are The Man.


Look at that cocky head tilt....we shoulda seen it coming. 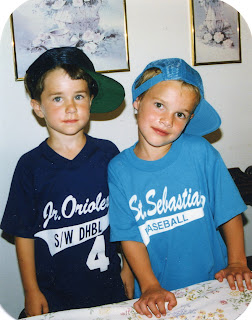