Ohhhh say can you sing?


Last night right before the start of my son's basketball game, the crowd was asked as they always are to stand and remove their hats, it was National Anthem time.

The announcers sitting at their stats table grabbed a student to read the Athlete's Statement. The statement is read at each game and is to remind those playing, coaching or watching the ball game to play nice.

After the statement was read we waited patiently while the announcers fiddled around with their cd player. We stood and watched, waiting for the familar first bars of the Star Spangled Banner to start.

As seconds ticked by, turning into minutes I began to wonder what in the hell they were gonna do...I didn't see any of the girl soloists who normally sing the song for us in the crowd, and it was becoming apparent that the cd player was not cooperating and it wasn't going to.

I wondered if maybe they would just start the game without the song.

The announcer looked out into the crowd and said into the mic "Looks like it's up to us" he said "will you please join me".

His request was followed by a slight uncomfortable silence.

A young football/baseball coach sitting next to the announcer grabbed the mic and sang a cappela the first few words of the song.

The people in the stands started to sing. I was amazed that it was not only the veterans, or the older people in the crowd who sang, it seemed every where I looked I could see mouths moving.

It was heartwarming to hear the loudest singing coming from the student section of the bleachers.

We died down a bit when the high notes of the song proved hard for most of us to hit, but we gained strength as we sang on. By the time we got to the end of the song, the kids were really hammin it up (respectfully) and the following words were sung clear and strong.

"O say, does that star-spangled banner yet wave
O'er the land of the free and the home of the brave?"

Then we gave ourselves a big hand.

My friend sitting next to me said, " Wow, its been a long time since I sang that song".

I don't recall ever singing it, I thought.

I've been to lots of games and heard that song performed a million different ways...tonight's rendition, slightly off key and proudly sung a cappella by a couple hundred regular folks was by far the most beautiful and moving I've ever heard.

I was incredibly proud of us all.

'Tis the star-spangled banner: O, long may it wave
O'er the land of the free and the home of the brave!" 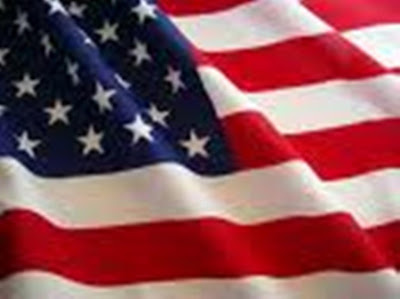 Labels: Proud to be an American