Believe it or not...I AM the mother.

Watched my sonny (sunny?) boy play basketball the other night through my fingers...(you know "OMG, I can't watch this" style.) They were playing their arch rivals and it was for a beginning season trophy.

My son has been suffering from a severe and devastating case of HesitatingtoshootandwhenIdonothinggoesinitis…very hard to witness.

While he’s not completely gotten over this bug, it appears as though he may be starting to recover.

He shot a couple of threes, had many assists and played some pretty good defense.

He left the house that morning on the list…you know what list I’m talking about.

I’d loaned him his brother’s family pass to get into a ball game. “Where is yours?” I’d asked him when he told me of his need.

“Don’t know” he said “you probably didn’t give it to me in the first place”.

Of course, I thought…my fault.

He’d borrowed the pass and now it was missing.

“I gave it back to you” he insisted.

“No you didn’t” I insisted right back.

“KNOCK IT OFF, QUIT BICKERING” boomed the Daddio from the living room.

We both shut up.

“She always looses stuff and then SHE blames me” he yells to his dad.

“The kid is full of crap…he didn’t return ANYTHING!!!” I hollered back.

Daddio gets worked up when we start talking about my piles…

(While I do have a real big problem with piles, I’m not a “Hoarder” contender just yet.)

Daddio came into the kitchen to add his two cents to the argument.

“Don’t raise your voice at your mother” he said, like a good husband.

“Yes, she is quite disorganized” he said “and she does lose everything…but, she’s still your mother”

“I’m sure he did give it back to you and it’s lost in a pile somewhere”,  Daddio said to me.

Thanks Daddio, for that back up…(I guess for a fat girl, I don’t sweat much, huh?)

When the kid left for school, I did a little sniffing around and found his wallet in a pair of his pants balled up on his bedroom floor.

It contained his license (Uh, kid shouldn’t that be in the car with you?), it held $10.00 (I thought you were supposed to put that in the gas tank last night?) a picture of his girlfriend and him at the prom last year and HIS BROTHER’S ATHLETIC FAMILY PASS… 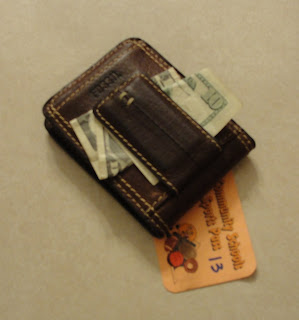 Oh man, I was going to have a field day with this one.

I had to disturb the crime scene to get it downstairs to show Daddio.

“I want you to witness this” I told him….”See” I said as I pulled the card out.

“In here the whole time” I continued

I challenged Daddio to a little bet.

“You wanna bet that he’ll say I planted it? “ I offered.

Later, after the ball game he called to say he was on his way home and to ask me to dish him up some tacos.

He’d gone to Taco Bell with his teammates, but didn’t eat there.

When he came home I showed him the wallet and the pass.

“You planted it didn’t you?” he asked.

“Did not” I replied

“Yeah, you did” he shot back

“KNOCK IT OFF IN THERE YOU TWO” Daddio boomed from his lazyboy.

“yes you did” he whispered back.