My kitchen classroom is filled with juvenile offenders. They have mouths dirtier than gas station toilets. They try to out-thug each other by telling stories about the first time they smoked weed (usually about age 8 or so) or what happened the first time they stayed a weekend at JDF (Juvenile Detention Center) and had to prove “who” they were…fighting for a “position” in the pods (the community area where their individual cells are contained).


I fight with them constantly about the cussing. I won’t tolerate it. And trying to explain to a 6’1” juvenile criminal missing all of his front teeth and carrying around a bullet, lodged somewhere in his neck, that he can not, and will not, swear or talk about how he smoked crack once with his grandma, while in my kitchen.

All I can say is that there are days my job drains me of all my energy.

Hectic and stressful, and many days are just plain freakin odd.

I often find myself thinking, “Why don’t you just bang yourself in the head with a rolling pin” that may get their attention. Or at the very least..it would put me out of my misery.

Some days though, I know I’m in the right place.

And I know exactly why I am where I am…and I don’t even glance at the rolling pin.

Yesterday was one such day.

The (loveable) thugs and I worked on potato dishes and desserts for our Thanksgiving feast.

I hand picked a group of teens, including “RT” (Rough & Toothless, the one with the bullet) to make cakes.

I could tell by the way his hands shook while holding the egg that I handed him that he’d never cracked one before. I don’t like to call them out on things like that, it embarrasses them. So I joke with the group…”I know most of you have thrown eggs at houses or cracked them over someone’s head… but if you’ve not cracked an egg to cook with before, I want you to watch how it’s done.”

I demonstrate how to do it and they follow my lead. So proud, when they do it right.

I fight disgust too every day at my job…disgust at the unfairness of life.

I think of my own three children, and see them, a couple of neighbor kids, and me making chocolate chip cookies. How they would take turns cracking eggs and using the mixer. Then lick the beaters and wait for the hot cookies. When they were done we would eat them and watch movies.

Then I look at what is before me… a roomful of almost fully grown men (and women) who have never cracked an egg. Used a mixer. Had a mom express how proud she is of them.

No time for that when you’re smoking crack with grandma.

Or fighting for respect at JDF.

No time to learn to bake a cake.

Not all of them have shit for parents…but the ones that do, I gather more tightly under my wing.

Rough & Toothless loved making the cake. He hung on my every instruction. And it appears he may be a natural.

It was a hoot watching him fit the oven mitts over his large paws and I stifled a giggle when I taught him how to test for doneness using a toothpick. He jabbed it in and jerked it out like he got an electrical shock.

“Do it like this” I said “slowly, that way you can see if any of the batter sticks to the toothpick”

When one of the cakes, baking in a glass pan, was taking longer time to bake Rough & Toothless sat and watched.

He’s usually the first one out the door.

Class had been over for ten minutes and he was still waiting for it to be done.

“You go ahead and go” I told him. “I will stay and get your cake out. I promise I won’t let it burn”

Once more he checked it for doneness. Closed the oven. Pried off the mitts.

“Thanks Ma” he said as he left the kitchen “I’ll see you tomorrow”.

Some days I can’t believe I call my work a “job”. 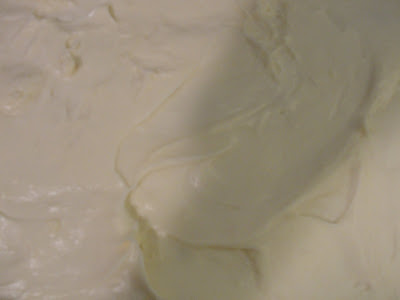