The Mystery of the Missing Undergarment…..

Yesterday, in the middle of the diarrhea attack I call my morning routine I lost my bra.


I remember it hanging from my middle finger and I remember putting it somewhere.

As I searched I tried to remain calm....It certainly wasn’t as bad as losing a pair of dirty underwear, or forgetting if you remembered to flush the toilet….but still.

I searched and searched for that bra. I opened cupboards and drawers and even the refrigerator.

I screamed at Daddio and the kids…”Has ANYONE seen my bra?” and “PleEEEEEEEESE, help me find my bra”.

Part of the embarrassment of losing the thing is that my Over The Shoulder Bolder Holder is not in the greatest shape.

By that I mean it is rather old and a tad dingy.

I have a few other bras…but most of those aren’t utility.

I suppose I could have worn one of them, but the only thing I could think of as I was rummaging through my lingerie drawer was “what if I should have a heart attack at work and the EMS guys have to slice my shirt and everyone standing around watching the heroic life saving effort sees me wearing a Fredericks of Hollywood issue black lace super-duper push up enhancement number, complete with fringe and silver studs???

How embarrassing would that be?

They’d never think of me the same.

I’m sure most women have lots of bras. I don’t.

Just like shoes and purses…you only need one of each color. Anything more, in my opinion, is wasteful.

Speaking of waste...I wasting a lot of time in search of that bra. And kept coming up empty handed.

My over active imagination went to work...with my luck a neighbor would pick today to come over and borrow a can of refried beans and come across my mislaid bra…”Who in this house is still wearing a training bra?” would probably be their first thought.

My biggest worry was that I wouldn’t ever find it and that later Bear or Trouble (Googie’s boyfriend) would stumble upon it.

I could envision it dangling from the cookie jar…or the back door handle.

God forbid, they would accidentally put their hand on it.

Eventually, due to the fact that I was beginning to run very late to work I was forced to stop looking and wear an old white rag I found in the bottom of my drawer.

The uncomfortable fit had me thinking about my missing brassiere all day long.

Being a creature of habit, I walked in the door after work and over to hang my coat…there, (right THERE all the time) on the coat peg was old faithful…hanging in all her dingy glory.

Smack-dab out in the open for the whole world to see.

I got momentarily sick to my stomach as I imagined all who may have come into contact with her (and their reaction) while we were apart.

No use crying over spilled milk, I guess.

This unfortunate ugly incident has forced me to make a decision I need to buy myself a couple of new bras…I do have an image to uphold. 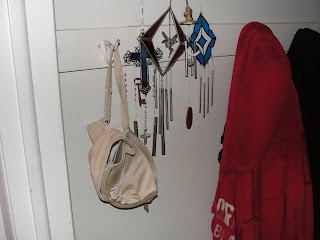