My portly Chihuahua (the one and only) Jersey girl suffers greatly when the temperature rises here in humid ol Michigan. Her fur is thick and long and the extra poundage she carries around (no thanks to me, I don't feed her from the table) doesn't help.

As a good mother, her comfort and well being is of upmost importance to me. For years I've been debating about getting her groomed.

Daddio and I were duped some years ago when we adopted Jerz from a reputable (??? umm, sure) "breeder" in Jackson. We'd been looking for a chihuahua ever since Googie decided she wanted to be the girl from Legally Blonde and had to ( just had to) have a small, fawn colored dog to put in her purse.

We've had lots of comments about Jersey' girth lately... we've also had quite a few about her "heritage".

"That dog is not all Chihuahua" we've been told a time or two.

That kind of crap really pissed me off... she haaaaaaaaaaaaaaa-s "papers".

You've probably heard the story of how we'd planned to surprise Bear with a dog for his 12th birthday. He'd been pissin and moanin for years ("caboose child syndrome") that the other two (much more favored) children of our home had been gifted with numerous pets (dogs, cats, rabbits, and a couple of other critters) and he'd only ever been allowed to be in charge of a bubble eyed fish (he named Flip) who went belly up after just a couple of days in his care.

He wanted a big dog, one he could ride around the backyard.

After much consideration (all for myself, selling points like small poop, baths in the kitchen sink, and thoughts of Googie's accessorized purse) I found him a wee pup that looked like a miniature deer. Certainly he'd fall so in love with this darling girl he wouldn't notice she wasn't a Huskie or a German Shepard.

What she lacked in size she sure made up for in cute and personality.

The first couple of years we had her I'd be surprised by the amount of hair that came off her body and stuck to things like my furniture and my guest's asses.

As Jersey has aged she's gotten even hairier... and a recent search of Google Images has confirmed what many have called her...part Pomeranian.

Pomeranians have lots of hair.

Even with the seasonal hair loss, poor Jersey still suffered greatly under the weight of a heavy hair suit.

I've been searching for a good (read cheap) groomer.

And by goodness, I found one.

The groomer agreed to take us on Sunday evening, around dinner time.

I wasn't going to be choosey about the day or time, it was last minute and she was "fitting me in".

Jersey was so excited to go for a car ride, her reaction caused a bit of guilt on my part, as I knew she'd be freaked out by the whole grooming thing.

The address where the groomer's shingle hung was a (rather dirty and dingy) "new" pet store in a neighboring town.

The groomer turned out to be a young (chatty, chatty, chat chat chatty chatty)....girl, clothed (she confided) in her husband's black Metallica t-shirt, a mixture of worn appliqué and a colorful array of animal hair and fur.

I put a very scared, shaky Jersey up on the table and the girl asked me "what kind of haircut do you want?"

Or the Clifford bob?

"Cut the dog whatever way you think the dog should be cut..." I instructed.

She began using a set of hair buzzers that hairdressers use (I have a pair at home) and the guard she put on wasn't cutting enough. I asked her to get a tighter one.

She did and took a huge chunk out of the hair on Jersey's back.

As she progressed, the haircut was looking choppy and you could see weird lines in Jerz's fur.

Not the look I imagined....

"Ohhh" she said trying to explain the odd clipping around her the scruff of my baby pooch's neck...

"with this big roll of fat here" (she said pointing to Jerz's neck) it's not going to clean up real well" she told me.

(ohhh brother, blame the fat dog for the crappy do)

When the hair debacle was all done it was time for a bath.

It was one of those times when you don't know whether to shit or go blind... I couldn't watch, yet I couldn't look away.

We've both been scarred for life, I'm sure.

During the bathing my poor dog had her ears pried up off her body. She endured cleaning crap squirted deep inside them. She had her face roughed up, and her eyes nearly wiped off the front of her face...

WHAT A FREAKIN AZZ CLUSTER...(and I was sooo responsible for it all)

Jersey didn't take her petrified eyes off the traitor that brought her to this horrible place... and the traitor's heart broke (in more than a million pieces) as every moment passed.

An old laundry basket held a pile of towels, the girl grabbed one off the side (it was wet as hell). When she saw me evil eye-in it (AND HER) she thought better about using it.

"I need to find a clean towel" she said as she left the room.

With her spirit appearing broken Jersey shivered in the large, stainless steel sink.

When the girl came back she was carrying a rumpled t-shirt in her hand. It was to become a makeshift towel to dry my dog.

When she pulled out a shop vac to finish the task I almost lost it....

For as long as I allowed, she blow-dried Jersey with the cold air the vacuum forcefully blew.

When I cried "uncle" she said.."wait a sec, one more thing" she then tied a cheesy (silky paper) BLUE ribbon on my female pup.

"Awwww, look at that handsome guy" the cashier said when I went to have her service rung up.

We made our way slowly to the parked car, my wet girl and I, her blue bow sagged underneath the uncooperative fat patch on her neck. 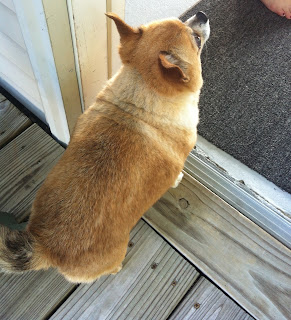 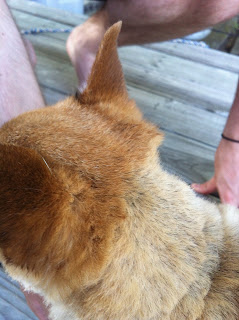 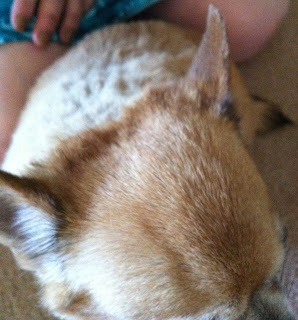 Upon seeing the pictures of Jersey post grooming my dad suggested that she lay low (stay in the house) for a couple of weeks so the neighborhood dogs wouldn't laugh at her.

Yes, (inquiring minds may want to know)  I DID PAY FOR THIS ATROCIOUS, MONSTROSITY  MASQUERADING AS A GROOMING...the girl was nice, and appeared broke, and put us in on a Sunday evening for cryin out loud.... (oh eff it...ever hear of Stockholm syndrome ?)